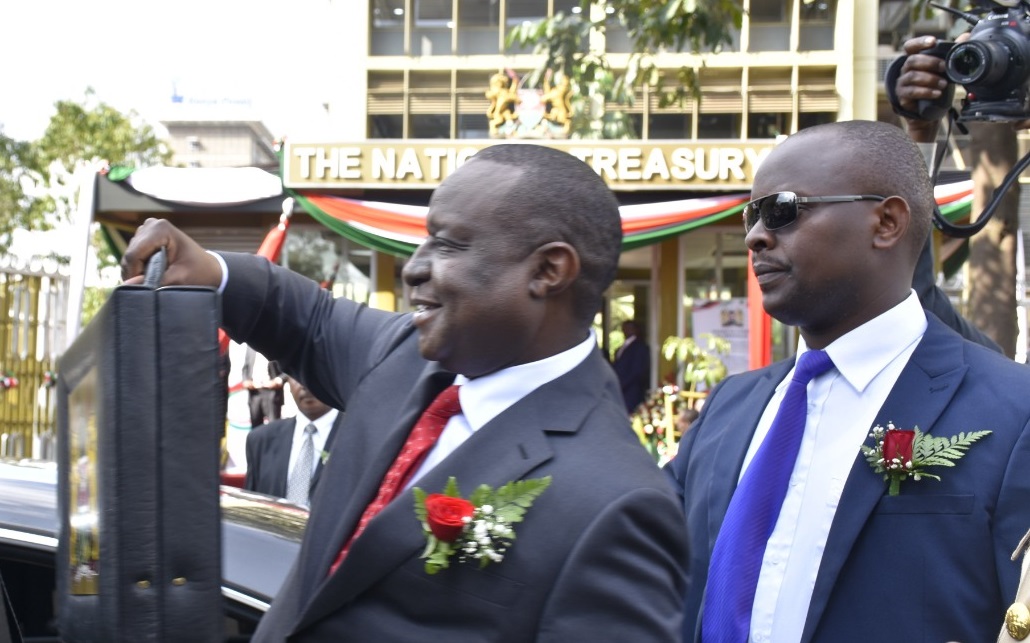 National Treasury Cabinet Secretary Henry Rotich. The fiscal status of the Government of Kenya remains precarious due to the lack of robust measures on fiscal consolidation. PHOTO / Brenda Gamonde

As expected, there were no significant shifts in budgetary allocations across sector priorities. The Big 4 Agenda was at the heart of the rhetoric and allocations will follow the four priority areas and the key enablers identified.

As with our pre-budget analysis, the concern remains with efforts around fiscal consolidation and the risks associated with the financing of government activities. There were no significant steps taken or announcements made that will robustly alter the current fiscal pressures facing the country.

The revenue target in the coming financial year including Appropriation in Aid is Ksh2.1 trillion. This is a very ambitious target and the government through the new Finance Bill 2019 is seeking to introduce a number of measures to achieve the target:

[ SEE ALSO:  Meet the 50-year-old who is too generous with his blood ]

a) Capital Gains Tax has been reviewed upwards from 5% to 12.5%, exempted from this are companies undergoing restructuring.

b) The Government has also made attempts to increase the tax base by expanding the scope of application of withholding tax by subjecting additional services to withholding taxes. These services include security services, cleaning and fumigation services, catering services offered outside hotel premises, transportation of goods excluding air transport services, sales promotion and marketing and advertising services.

d) To increase excise revenue, the rates of excise duty on cigarettes, wines and spirits has been increased by 15% as well as a new 10% excise duty on betting stakes placed.

On the fiscal consolidation strategy of enhancing revenue mobilization, the budget speech did not highlight any unexpected new measures that would greatly boost collection. On the one hand, this is a positive outcome due to the fact that tax rates have already proved to be a hindrance in the expansion of private sector and business activity.

On the other hand, with the new record targets of revenue collection, it is very difficult to see how the Government will be able to reach these given current trends. There have been some measures announced, such as the widening of payees of withholding tax for professional services, that are expected to expand the tax base, but these are again minor reforms.

Expanding the tax base, particularly around the informal sector, is the only way expansive strides in enhancing revenue mobilization can be made without hindering the operation and scaling of private sector activity that in itself will boost the base.

Fiscal pressures continue to be the biggest challenge to the Kenyan economy in the next five years due to the lack of robust reform in consolidation, particularly the rationalization of recurrent expenditure.

Expenditures and net lending are projected at Ksh2.8 trillion leaving a fiscal deficit including grants of Ksh 607.8 billion.

Only a few measures were announced on this strategy of fiscal consolidation. It is unclear how the introduction of smart cards will save on spending as they will be pre-loaded with subsistence allowance. The cards are not necessarily a review of the travel allowances downwards but simply a measure of accountability on amount used.

Overall, the fiscal status of the Government of Kenya remains precarious due to the lack of robust measures on fiscal consolidation. This is particularly around the rationalization of recurrent expenditure which remains at retrogressive high levels.

Without significant reform in lowering recurrent expenditure, the fiscal deficit will maintain at the 6-7% of GDP levels (double the target) and public debt will continue to be sought to service government financing (fiscal deficit for 2019/20 is expected to be financed by net external financing of Ksh324.3 billion and net domestic financing of Ksh283.5 billion).

We maintain the position that fiscal pressures continue to be the biggest challenge to the Kenyan economy in the next five years due to the lack of robust reform in consolidation, particularly the rationalization of recurrent expenditure.

[ NEXT: Real estate CEO offers tips on where idle 1,000 shilling notes are likely to go ]

The Kenya Business Guide (KBG) is a think-tank that seeks to support the improvement and strengthening of the business environment in Kenya by providing access to information on key features of both the private and public sector. The KBG develops curated and value-added information to assist leaders in making more effective decisions. Email: [email protected]

KCB’s negative performance was reflected in its subsidiary, National Bank of Kenya (NBK) which slid right back into loss making

he bank’s performance, despite the COVID-19 pandemic, was driven by growth in loans and enhanced returns from government securities.

NCBA CEO John Gachora says the bank’s analysis had shown that Kenyans who borrow below Ksh2,000 do not use it for unplanned expenditures