Jose Mourinho has included 5 goalkeepers in his Champions League squad but did not have space for Wanyama. Photo/Business Today

The past two years haven’t been the best ones for Harambee Star Captain and Tottenham hotspurs midfielder, Victor Wanyama.

Wanyama has fallen out of favour at his English club which highly influenced his performance for the national team. His impact was seldom felt during Kenya’s campaign at the Africa Cup of Nations in 2019.

Worse has now come to worst as Wanyama has been outwardly shown that the manager doesn’t have a plan for him. There was little hope for the Kenyan International after Jose Mourinho joined the club to replace Mauricio Pochettino.

The change meant a fresh opportunity for Wanyama. The Harambee Stars captain had already fallen out of favour with Pochettino. He could have impressed Mourinho and get back to the team but unfortunately, he has only played one match so far under Mourinho.

The only option Wanyama was left with was to leave Tottenham and join a lesser club. It is the only chance to ever get back to first-team football and hence, be a crucial player for Harambee Stars once again.

However, Wanyama’s transfer deals to multiple clubs failed to go through as he was not willing to take a pay cut. Wanyama currently earns Sh 8.4 million in a week at Tottenham hotspur. Moving to Celtic, Fiorentina or Leganes will mean he earns less than that as those clubs cannot maintain paying his current salary.

Wanyama’s reluctance to take a pay cut is likely to cost him a fortune. Tottenham Hotspur boss, Jose Mourinho has now made it clear that he does not need Wanyama in his squad.

“Victor is from a position where we have lots of players – (Harry) Winks, (Eric) Dier, (Oliver) Skipp, Gedson (Fernandes),” said Mourinho about the Kenyan captain.

The club is also said to be considering terminating Wanyama’s contract making him a free agent. The club was eager to sell him during the January window but potential suitors, among them Fiorentina, Leganes and Celtic, were put off with Spurs’ huge asking price, estimated at around Sh 1.3 billion.

Whether his contract will be terminated or not, Wanyama’s only option is to leave Spurs for a lesser club. He will lose bargaining power once he is released by Spurs and will end up earning way less if at all he finds a club. 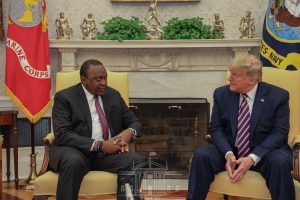 Trump Courts Kenya Aggressively. Slams The Door on ‘Uncooperative’ African Countries
Kenya to open up its wheat market to the US