SportPesa was forced to close shop in Kenya after failing to renew its license with the Betting Control and Licensing Board (BCLB). Photo/Business Today

Betting giant SportPesa has been dealt another blow after the Football Association of Ireland (FAI) terminated its sponsorship deal with the betting firm.

SportPesa originated in Kenya before spreading its wings to South Africa, Tanzania, Ireland and the UK – where it sponsors premier league side Everton FC. SportPesa was pushed out of the country after the Kenya Revenue Authority (KRA) put in place unfavourable tax conditions to discourage gambling in the country.

When terminating the deal, FAI pointed out that they were ‘changing their priorities’ and ‘reevaluating its partnership portfolio.

“We thank SportPesa for their sponsorship and their professionalism over the course of this deal. We wish the company well with its diversification strategy,” a spokesman from FAI said.

SportPesa, on the other hand, noted that both parties mutually agreed to terminate the partnership. A spokesman from the betting company said that the firm respects FAI’s decision to shift priorities and reevaluate its partnerships’ portfolio.

See Also>> Soon You Will Afford Your Dream House in Kenya

The termination of the contract by FAI could also mean that SportPesa might close operations in Ireland. The betting company had terminated its deal to sponsor the Kenyan top tier league before finally closing down all operations in the country.

However, in Kenya SportPesa were forced to leave after the tax demands were made ‘unbearable for the company to operate profitably’. They had acquired a license from the Betting Control and Licensing Board (BCLB) but KRA’s demands forced them to close shop.

SportPesa and Betin’s exit created room for smaller betting firms to step up and occupy the space in the market. Kenya has seen the likes of Odibets, Betika, and Betway compete to take over SportPesa’s spot in the country.

However, these betting firms have lamented about the outrageous tax demands and have gone to court severally to challenge the taxman. No one has been successful so far but the government which has reduced the levels of gambling in the country.

Punters have reduced betting levels after KRA instructed that they also pay some tax from their stakes and winnings. This made the returns on betting plummet leading away most punters.

Next>> Jumia To Use Customers’ Data To Monetise Its Platform 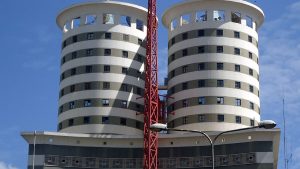