Former President Daniel Moi with his wife Lena. Moi passed on in the early hours of Tuesday morning. [Photo/Getty]

Despite the power in his hands and the stakes he controlled, the former strongman could also not take alcohol. He also made sure that those who worked around him while president could not drink in his presence.

The man who was a former shadow of himself in his last days was hailed for having a photographic memory. This was evident during his reign where he referred to Provincial Commissioners (PCs) and District Commissioners (DCs) by name. This he did without referring to any notes.

The man was known for making roadside declarations without much thought and it is intimated that most officials who served in government during his reign never missed news bulletins. It was during these events on radio, especially national broadcaster KBC, that many were hired or fired.

When doing his rounds in the country, he could chew gum and walk at the same time and so even as he hired and fired, he could throw in some comments which could leave his audiences in stitches or squirming depending on which side of Moi’s wrath they fell.

In a speech given to aspiring leaders, Moi advised them not to be selfish with their ambitions but to put the country first.

On political folly, Moi often said that a pig fries itself in its own lard. Nguruwe hujikaanga na mafuta yake.

Moi was also a nationalist who believed in a united people and nation.

“When I talk about politics, people think I am a racist. I am not. I am an African believing in nationhood,” he once said.

The former president also hated a president without power and on a proposed constitution where the president’s powers would be checked, he said a ceremonial president would be ineffective.

The professor of politics knew how to deal with every political issue that came up during his time.

He at one time said that freedom in Kenya was not limited. He said that everyone had unlimited opportunities except for political leadership.

“In Kenya everybody is free, foreigners, businessmen…do business.”

As long as there was no interference with his running the government the best way he knew how, Moi was cool with those who could respect his boundaries- perceived or real.

When Moi disappeared from the public for a week, he made a surprise visit to Harambee House where he said, “Apana kueneza uvumi kila mahali. Eti hao wanasema Moi mgonjwa, mgonjwa wapi?”

The disappearance had made people think that Moi was sick but he was away from the limelight to strategise against the pressure by the IMF and the opposition voice which was hitting a crescendo.

Moi, the teacher who rose to become Kenya’s President when Jomo Kenyatta died on August 22, 1978, also knew a thing or two about spoilt eggs. He once said that if one is looking for good eggs, the best way to test them is by dipping them in water to see which ones would float. That way, the best eggs could be identified.

He gave the allegory during a delegates’ conference in 1992 where some party members were seeking to have some sections of the constitution repealed. The delegates wanted Kanu- the baba na mama party- to remain dominant in Kenya.

When Moi fronted Uhuru Kenyatta as his successor, he exhorted him to be strong especially going by the fact that the vice president then would have easily been a likely candidate for the top office.

“The vice president is my friend but leadership is not about friendship. Being a leader is not easy so when abused, you need to be tolerant…,” he said.

Moi loved education and so he spent most of his time asking that Kenyans embrace learning.

On his 90th birthday, the former president was in Nakuru where he received a card from Kabarak Primary School pupils at Kabarak University.

The billionaire spent close to Sh10 million yearly on philanthropy. Most of this money went to supporting schools most of which were named after him.

Despite all the billions, Moi was never a double-breasted suit or trousers with turn-ups kind of person. And, he stuck with the same tailor even after he left office.

While the power could afford him to use any means to travel, he, however, liked fast driving and enjoyed the thrill when his driver treated him to this.

Kenya’s communities are diverse and twice, the president slept in a tent while meeting communities in a remote part of Kenya.

And probably his dislike for the mzungu worship came from when he was denied an opportunity to join Alliance High School in 1945. At the time, the colonial administration sent him to a teachers college instead.

“Welcome home the cattle!” is what his name Toroitich means. The man who owns immense wealth in Kenya has indeed welcomed more than cattle during his long life which he lived in the glare of the cameras.

Read>>> The Only Woman Who Defied Moi 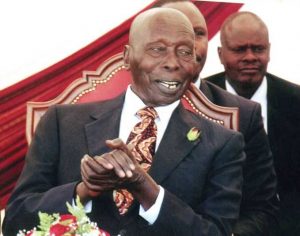