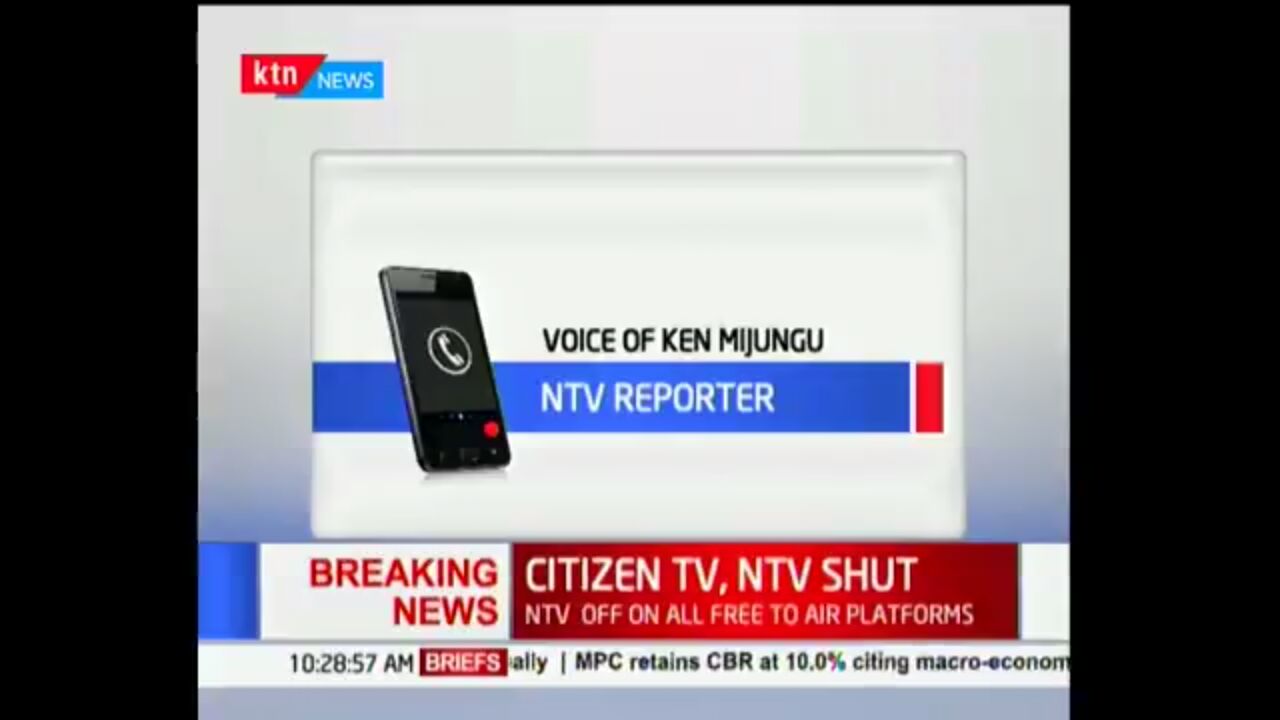 Some analysts are blaming the Kenyan media for the position it found itself in on Tuesday, noting that it had participated in the making of its plight.

“The problem with Kenya media is that it refused to enjoy the freedom it was given. It refused to occupy its own space as enshrined in the Constitution, so it should not complain,” said Professor Herman Manyora, a political analyst.

Henry Wandera, an economics lecturer in Nairobi, noted that the shutdown of the media showed the great lengths the government can go to deny people the right to information.

“The government has for a long time been warning the media to tore the line or face sanctions. We are seeing it happen today and the entire country is now in the dark yet a key event in the country’s history is happening. Even if deemed bad, the government should have allowed citizens to know what is happening and deal with any criminal act in accordance with the law,” said Wandera.

Opinion was, however, divided among ordinary supporters of Jubilee and the opposition on the media shutdown. Jubilee adherents welcomed the move noting that allowing TV stations to air the ceremony amounted to incitement.

“It is the best thing to have happened to the country on Tuesday because the ceremony would have had a spiral effect and affected businesses in other parts of the nation,” said Stephen Kariuki, a businessman.

Moses Omolo, a NASA follower, said media shutdown amounted to denial of basic human right. “Information is as key as oxygen and water. The right to information is enshrined in the constitution and must be guaranteed. With or without media, we would go on with the ceremony as planned,” he said.

The current stalemate between the government and the opposition is expected to prolong Kenya’s political crisis, which arose after the Aug. 8, 2017 polls.

Kenya Editors Guild called the action of shutting down the stations an affront to media freedom and noted that the media was not an actor in the ongoing contest between ruling party Jubilee and opposition National Super Alliance (NASA).

“The media remains a messenger and a chronicler of events happenings in the country, which has a vibrant industry made up of competent professional in journalists and editors that continue to make sound decisions of what constitutes news,” said Linus Kaikai, chairman of the Kenya Editors Guild, in a statement on Monday evening.

The shutting down of the free to air channels followed a directive that had asked media houses not to televise the opposition event.

Nearly all the private mainstream media stations had started showing the event early Tuesday morning, an action that led to the shutdown.

Among those switched off by the Communication Commission of Kenya (CA) were NTV, KTN, Inooro and Citizen televisions and a host of radio stations allied to the channels.

“We would like to confirm that this morning, the CA disconnected Citizen TV and Inooro TV transmission. There has been no official communication as to why this action was taken,” said Wachira Waruru, the managing director of Royal Media Services, which owns Citizen TV.

“We are actively engaging the relevant government authorities to establish the reason for the action and we hope to resume normal transmission soon,” added Waruru, as the stations and others turned to social media to update their audiences.

On Monday, it emerged President Uhuru Kenyatta and his deputy William Ruto had held a meeting with several media executives in which the government threatened to revoke licenses of the stations that would air the event.