In a season filled with grief all over the country, a boda boda mechanic from Kisumu has found himself a reason to smile.

Leonard Onyango was lucky enough to become the first Odibet’s big winner in 2020 after he placed a bet on what could be termed as simple predictions. Onyango bagged Ksh 2, 401, 000 from four back to back soccer bets on the online gaming platform.

Born a little over 30 years ago, the boda boda mechanic is among the youth in Kenya who refused to turn their backs on sports betting despite the government’s efforts to curb the vice. This time, Onyango’s hopes paid off as he turned into a millionaire overnight.

Odibets Kenya’s head of bookmaking Daniel Macharia said that Onyango’s bet was unique and he had never seen anything much like it.

“Leonard’s bet slip is one of the most interesting we have seen this year,” Macharia noted.

“In the 4 wins, Leonard had 7 winning draw bets and it paid off handsomely. He predicted among others, Juve’s draw at Atalanta on Sunday which is quite a feat,” he added.

A visibly elated Onyango had a bit to say when he was visited by the Odi Mtaani team at his home in Kisumu. The team that also distributes jerseys and soccer balls to the county soccer league visited the boda boda mechanic to hand him a cheque that has changed his life.

“I will use this money to endeleza my biashara (maintain my business) as well as take care of my family,” the boda boda mechanic stated. The Kisumu resident had some advice for punters who are yet to win.

“What I can tell them is that if they haven’t won such an amount before, they shouldn’t give up! Tomorrow could be the day you win big like me!” he uttered.

The state of betting has since changed in the country which has seen an end to jackpots. Winning big money on sports betting has become more difficult and easier at the same time.

The punters who are looking for life changing wins are only left with multibets as their only hope. At the same time, one can still win big money in fewer games than he would have predicted in a jackpot.

The scene in the industry is also building itself up with betting companies like Odibets stepping in to fill the voids. The present companies are taking up Sports sponsorships and also introducing previous forms of betting including virtual betting. 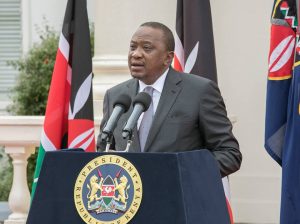 Uhuru’s Health Equipment Project a Burden to Taxpayers: Study
The project has been shrouded in secrecy with the national…