Kenya’s Geoffrey Kamworor on Sunday broke the world record in winning the fifth edition of the Copenhagen Half Marathon in an official time of 58:01.

Kamworor, a three-time champion, broke the record time of 58.18 held by compatriot Abraham Kiptum, who triumphed at the Valencia Half Marathon in October last year.

Fellow world-record holder Eliud Kipchoge has termed Kamworor as the man who could possibly shatter his marathon world record. Kipchoge ran the record mark of two hours, one minute and 39 seconds in Berlin last year.

Kipchoge is confident that the 26-year-old new world record holder and training partner in Kaptagat will break his current World record. The Olympic champion and record holder said that Kamworor is definitely destined for greatness if he keeps up with his hard work and discipline in training.

“Absolutely! He is the man and everything is possible if we continue to embrace great planning, preparations, camaraderie, management, and coaches,” said Kipchoge when asked if Kamworor is his heir-apparent in the 42km.

In the Copenhagen marathon on Sunday, Kenyan Bernard Kipkorir took second place in 59:16 while Ethiopia’s Berehanu Wendemu Tsegu finished third in a time of 59:22.

Kamworor opted out of competing at the 2019 IAAF World Athletics Championships in Doha, Qatar, in order to make an attempt at breaking the world record.

The win sees Kamworor secure his fourth half marathon title following victories at the same venue in 2014, Cardiff in 2016 and Valencia in 2018.

Kamworor disclosed that it’s the inspiration and push from his fans that drove him to break the world record.

“I have won three World Half Marathon Championship titles and my fans kept on asking me when I would down the world record. They said I am the one do it and I assured them that time will surely come,” said Kamwowor after his victory.

Kamworor is a former New York City Marathon champion and he also won silver in the men’s 10,000m race at the 2015 World Championships in Beijing, China.

After a toe-to-toe battle with Kenya’s Evaline Chirchir over the distance in women’s race, Ethiopian Birhane Dibaba Adugna managed to shake off the Kenyan to win in 1:05:57. Chirchir came second in 1:06:22 with compatriot Dorcas Jepchirchir Tuitoek clocking 1:06:36 for third. 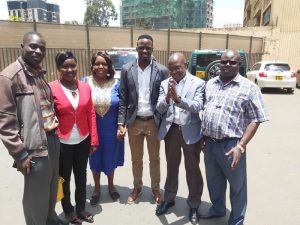