Kenyans moved Ksh564 million per day via mobile money channels between late April and early May as they sought to make most of the measures introduced by the Central Bank of Kenya (CBK) to cushion the Kenyan economy from the projected devastating effects of the COVID-19 Pandemic.

In March, the regulator doubled the mobile money transaction limit to Ksh300,000 among other measures and fast forward, CBK statistics now show that the Ksh Ksh.70,001 – Ksh.150,000transaction band recorded a daily average 5,457 transactions worth Ksh.564.48 million per day from April 20 to May 10.

That was an increment from the Ksh428.5 million daily average recorded in the period between March 16 and April 19.

The Ksh101- Ksh500 band also recorded an increased average of 2 million transactions per day worth Ksh235.57million

‘This confirms that the waiver of fees for up to Ksh.1,000 encouraged more mobile money transactions,” said Dr. Njoroge in a statement.

According to Dr. Njoroge, the trend justifies the introduction of the higher limit for mobile money as part of the emergency measures.

In April, the seven largest banks in the country also restructured loans worth Ksh176 billion as more Kenyans sought moratoriums on loans.

According to the CBK Governor, as of May 15, eighteen commercial banks and two microfinance banks had been
granted approval to access Ksh29.08 billion freed from the reduction in Cash Reserve Ratio (CRR).

This accounted for 82.61 percent of the Ksh.35.2 billion freed by the 1 percent reduction in CRR as part of the stimulus measures announced by CBK.

Dr Njoroge says 82.6% of the29 billion was used in just one and half months, channeled to borrowers to provide relief to customers affected by COVID-19. 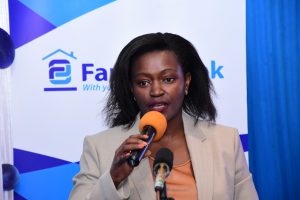