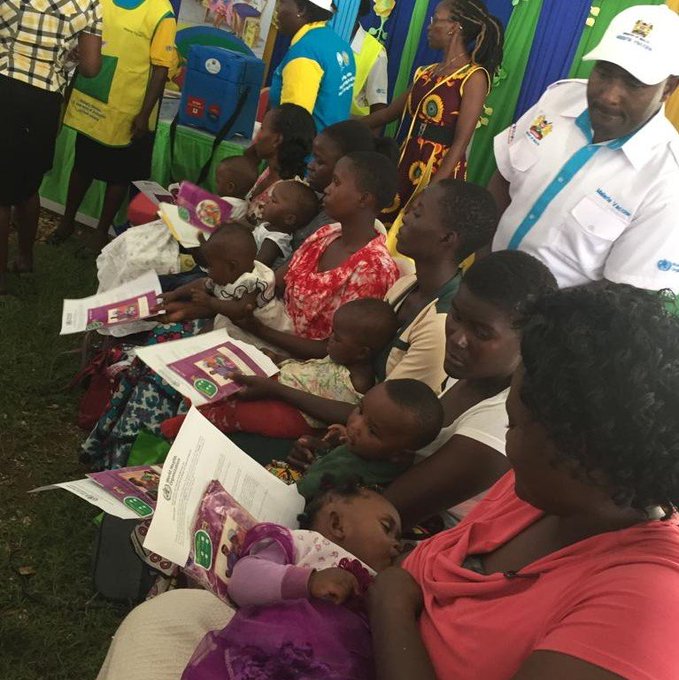 Kenya on Friday became the third country in Africa to launch the world’s first malaria vaccine in Homa Bay County.

The malaria vaccine pilot programme is now fully underway in Africa, as Kenya joins Ghana and Malawi to introduce the landmark vaccine as a tool against a d*****e that continues to affect millions of children in Africa.

The vaccine, known as RTS,S, will be available to children from 6 months of age in selected areas of the country in a phased pilot introduction. It is the first and only vaccine to significantly reduce malaria in children, including life-threatening malaria.

Malaria claims the life of one child every two minutes. The d*****e is a leading k****r of children younger than 5 years in Kenya.

” Malaria vaccine is an affirmation of the Government’s commitment towards control, elimination and eradication of communicable d******s in our Nation,” Health Cabinet Secretary Sicily Kariuki during the launch.

“Africa has witnessed a recent surge in the number of malaria cases and d****s. This threatens the gains in the fight against malaria made in the past two decades,” said Dr Matshidiso Moeti, WHO Regional Director for Africa. “The ongoing pilots will provide the key information and data to inform a WHO policy on the broader use of the vaccine in sub-Saharan Africa. If introduced widely, the vaccine has the potential to save tens of thousands of lives.”

First vaccination: a day to celebrate

Top health officials, community leaders and health advocates gathered in Homa Bay – one of eight counties where the vaccine will be introduced in selected areas – to mark the historic moment with declarations of support for the promising new malaria prevention tool and to demonstrate a ceremonial first vaccination of a 6-month-old child.

WHO Representative to Kenya Dr Rudi Eggers said: “Vaccines are powerful tools that effectively reach and better protect the health of children who may not have immediate access to the doctors, nurses and health facilities they need to save them when severe illness comes. This is a day to celebrate as we begin to learn more about what this vaccine can do to change the trajectory of malaria though childhood vaccination.”

Thirty years in the making, the vaccine is a complementary malaria control tool – to be added to the core package of WHO-recommended measures for malaria prevention, including the routine use of insecticide-treated bed nets, indoor spraying with insecticides and timely access to malaria testing and treatment.

The Ministry of Health, through the National Vaccines and Immunization Programme, is leading the phased vaccine introduction in areas of high malaria transmission, where the vaccine can have the greatest impact.

The aim is to vaccinate about 120 000 children per year across the selected introduction areas, including Homa Bay, Kisumu, Migori, Siaya, Busia, Bungoma, Vihiga and Kakamega counties. Within the eight counties, some sub-counties will introduce the vaccine into immunization schedules while others are expected to introduce the vaccine later.

The WHO-coordinated pilot programme is a collaboration with the ministries of health in Ghana, Kenya and Malawi and a range of in-country and international partners, including PATH, a non-profit organization, and GSK, the vaccine developer and manufacturer, which is donating up to 10 million vaccine doses for this pilot.

Financing for the pilot programme has been mobilised through an unprecedented collaboration among three key global health funding bodies: Gavi, the Vaccine Alliance; the Global Fund to Fight AIDS, Tuberculosis and Malaria; and Unitaid.