Kenya’s internet has been ranked the fastest in Africa and one of the most affordable, according to the latest report by Akamai’s State of the Internet Connectivity Report, beating the continent’s economic power houses South Africa and Nigeria.

Akamai, the US-based cloud services provider, ranks Kenya 23rd out of the 108 countries sampled globally in terms of internet speed, with speeds of 15 megabytes per second (Mbps). South Korea has the highest average connection speed globally at 26.1 Mbps.

In Africa, Kenya is followed by South Africa with an leverage speed of 6.0 Mpbs,  Morocco at 4.7 Mpbs, Nigeria at 3.7 Mpbs, while Egypt clocks in fifth at 2.7 Mpbs and Namibia at 2.5 Mbps. “In most African countries internet is expensive and  speeds are generally slow,” said the report attributing favourable costs to competition in the internet market.

According to the report, Kenya overtook third-quarter leader Israel to gain the top spot for average connection speeds among the surveyed Middle East and Africa countries in the fourth quarter. In terms of internet usage, Kenya tops again with seven out of 10 Kenyans using the internet, representing a 70% penetration, the deepest in Africa. 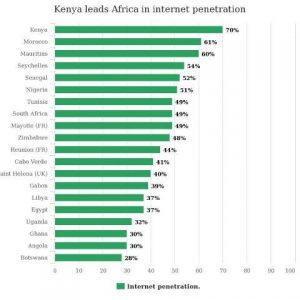 Kenya also had the highest adoption growth of 15 Mbps range at 5,159%, though this is the first time Kenya is being included in this metric.

Yearly changes were also strongly positive across the board, with Saudi Arabia, Kenya, Iran, and Morocco experiencing outsized gains of more than 1,000%.

Also Read >> Is this the beginning of the end of Blue Band?

Twelve of the thirteen MEA countries posted quarterly gains in the fourth quarter, with Egypt seeing the only decline. Nigeria had the largest increase at 39 percent, while Qatar had the smallest at 9.4 percent.

“With 61% of its IPv4 addresses connecting to Akamai at speeds of 10 Mbps or higher, Kenya took the top spot for 10 Mbps broadband adoption among qualifying MEA countries, overtaking third-quarter leader Israel. Kenya and Israel were the only two countries in the region with adoption rates above 50% in the fourth quarter.”