A Kenya Airways plane. The company has suspended all international flights.

National carrier Kenya Airways on Sunday suspended all international passenger flights effective Wednesday on a day Kenya reported 8 more COVID-19 cases that brought the total number of coronavirus cases in the country to 15.

This is likely to leave Kenya Airways as the biggest casualty of the virus in Kenya with airline honchos struggling to craft methods to keep the debt-ridden airline afloat.

Chief Executive Allan Kilavuka said that the listed company had reached a decision to suspend all international flights but stressed that its cargo business will remain operational to transport emergency services and supplies.

“The Government of Kenya has issued a directive that requires all incoming and outgoing international passenger traffic to and from Kenya. To comply with this directive, we have therefore temporarily suspended all international services effective midnight March 25, 2020, until further notice,” said Kilavuka.

Domestic flights, however, will until further notice remain operational.

Customers who had booked flights in advance will be able to reschedule the flights once the airline resumes normal operations or exchange their booking tickets for vouchers for future travel within 12 months.

Earlier, the company had announced steep pay cuts both for senior management as well as mid-level and junior staff as the going at the carrier got tough, now the worst-case scenario has been realised.

Kilavuka by virtue of being Managing Director and one of the highest-earning staff at the company agreed to an 80% pay cut, other senior management including board members took a 75% pay cut while normal staff were being lined up for 50% pay trims.

“My communication on March 17 regarding the 25 percent pay cut for the leadership team and 35 percent for myself has been superseded as the situation has evolved significantly,” said Kilavuka. “They will now be subjected to a 75 percent pay cut and I will get an 80 percent pay cut,”

The Managing Director, however, dismissed the idea that the airline will layoff any employees in the near future.

Kenya Airways joins other airlines such as Air France, Austrian Airlines, KLM, RwandAir and South African Airways that have grounded at least 90% of their operations or suspended their international flights altogether. 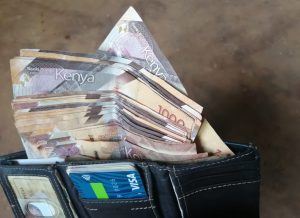