KCB Group Plc profit after tax surged 6% to Ksh19.2 billion for the nine months ending September 2019 on the back of significant growth in loans and non-funded income.

“We had a strong quarter and the business witnessed growth across various segments.  The international businesses have continued to improve while our digital offerings are witnessing increased activity, giving the business impetus to continue growing,” said Mr Oigara.

He said the bank is now focusing more on sustainable growth and diversification.

Net interest income expanded 7% to Kshs38.7 billion from Ksh36.3 billion primarily due to a growth in loan book and reduced cost of funds. The loan book closed at Ksh 486.4 billion from Ksh435.3 billion, an improvement of 12%, reflecting the strong lending pipeline primarily driven by retail and corporate banking customer segment.

The Group’s balance sheet expanded by 12% to Ksh764.3 billion from Ksh684.2 billion, with deposits up by 11% to Ksh586.7 billion supported by continued strong growth in personal and transaction accounts.

Despite a tough operating environment in the countries KCB operates in, the international business posted improved performance. The combined after-tax profit increased 8% to Ksh1.3 billion. Other than the Ugandan business, the rest of the 4 banking subsidiaries returned a profit.

This overall growth has seen the Group maintain its market leadership position. In September, KCB Group Plc was ranked at position 717 in The Banker’s Top 1000 World Banks ranking for 2019, climbing nearly 100 places up, on the back of steady growth and strong balance sheet credentials.

The improvement from position 809 last year has also seen the Bank emerge 21 in Africa and number 1 in Eastern Africa. KCB was Africa’s highest mover in the ranking, which tracks the health and wealth of the global banking sector, reaffirming the Bank’s credentials assigned by global rating agencies.

In its latest review, rating firm S&P Global Ratings affirmed its ‘B+/B’ long and short-term issuer credit ratings on KCB, with a stable outlook. S&P said the bank is well placed to maintain its revenue stability in the current economic environment, reflecting the country’s relatively well-diversified economic base and strong private sector.

The acquisition of National Bank of Kenya (NBK) is expected to further cement KCB’s position in the domestic banking sector and strengthens its ability to access more business flows. On November 1, NBK announced profits before tax of Ksh675 million shillings for the period ended September 30, 2019, representing a 45% growth from a similar period in 2018. 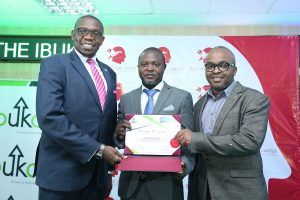