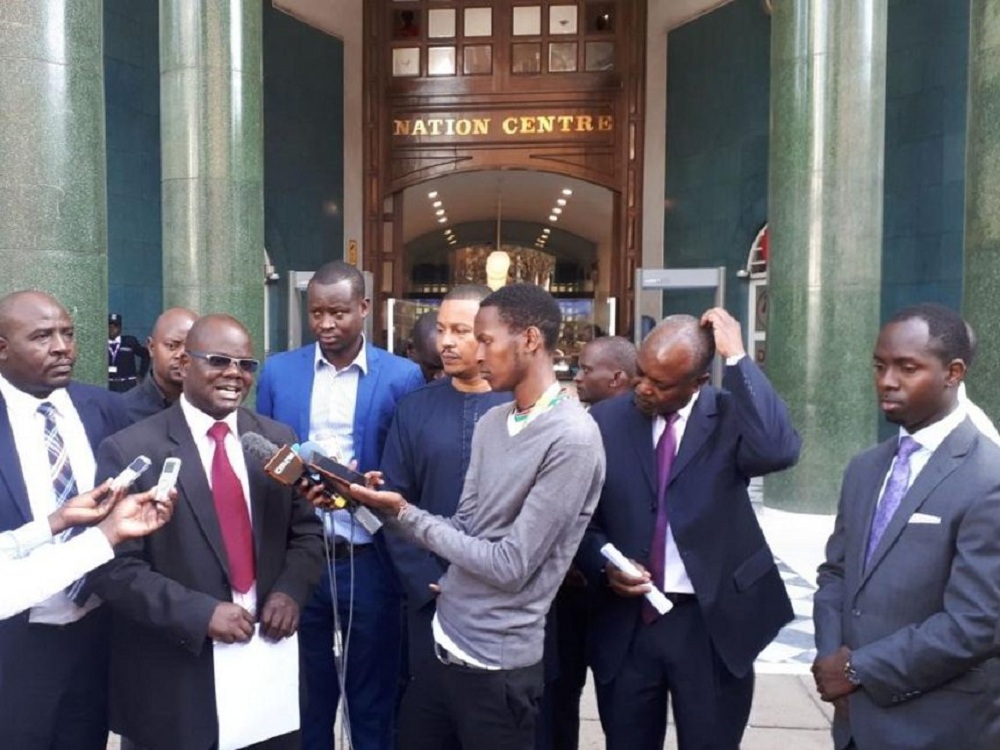 NTV General Manager Linus Kaikai and anchors Larry Madowo and Ken Mijungu were forced to spend last night at Nation Centre to evade a****t after it emerged that team of plain clothes officers Wednesday evening  appeared outside Nation Centre looking for them.

The development came after Interior Cabinet Secretary Fred Matiang’i announced that the government had commenced a p***e into the ‘swearing in’ of Mr Raila Odinga as the “People’s President”.

Matiang’i said the p***e would extend to NASA principals, organisers and facilitators of the event as well as media houses he claimed had been given the full security situation brief regarding the planned ‘swearing-in’ but chose to “disregard the advice”.

“The government was and is aware of the role of some elements in the media who participated in the furtherance of this i*****l act. Their complicity would have led to the d***h of thousands of innocent Kenyans…” said Matiang’i on Thursday.

“Some media houses chose to disregard this advise, their own code of ethics, self-regulation and the moral responsibility of every Kenyan to safeguard the security of their fellow citizens.”

“We were doing our job, we had the right to do this, and if I was to do it again, I’d do it the same way,” NTV senior anchor and reporter Ken Mijungu told Reuters after an anxious night spent conferring with lawyers and wondering if police would appear with a****t warrants.

He said his colleagues, Larry Madowo and Linus Kaikai, had all been independently warned by security sources on Wednesday that their a****t was imminent.

In the early evening, when men they believed were plainclothes police appeared outside their office building, they were advised by the station’s management to stay inside.

By Thursday morning, the trio was still in their newsroom.

“Our head of security said he has reason to believe they have gone for reinforcements,” said Madowo, 30, who was producing coverage on Tuesday before authorities took NTV off air.

According to Reuters, in African states with entrenched rulers such as the Democratic Republic of Congo and Cameroon, governments have asked telecommunications companies to block social media, mainly during elections and protests.

But, it adds, the shutdown of TV stations in Kenya came as a shock to journalists used to operating freely.

“This is clearly a slide to dictatorship. It’s a return to a repressive period we had forgotten about,” said Madowo. “We are becoming another African country with these kinds of issues.”

READ: Standard moves to get KTN News back on air

Kaikai, who is also chairman of the Kenya Editors’ Guild, said editors had been warned by authorities that they could be shut down if they covered the event.

The stations would stay off air indefinitely, the government said on Wednesday, as it investigates the symbolic oath by Odinga, directly challenging President Uhuru Kenyatta.

“This is a gross a***e of the law and complete disregard for the Constitution,” said Mijungu.

Also on Wednesday, police a******d Tom Kajwang, an opposition lawmaker who administered Odinga’s “oath”. He was expected to be charged on Thursday with administering an u******l oath, a security source told Reuters.