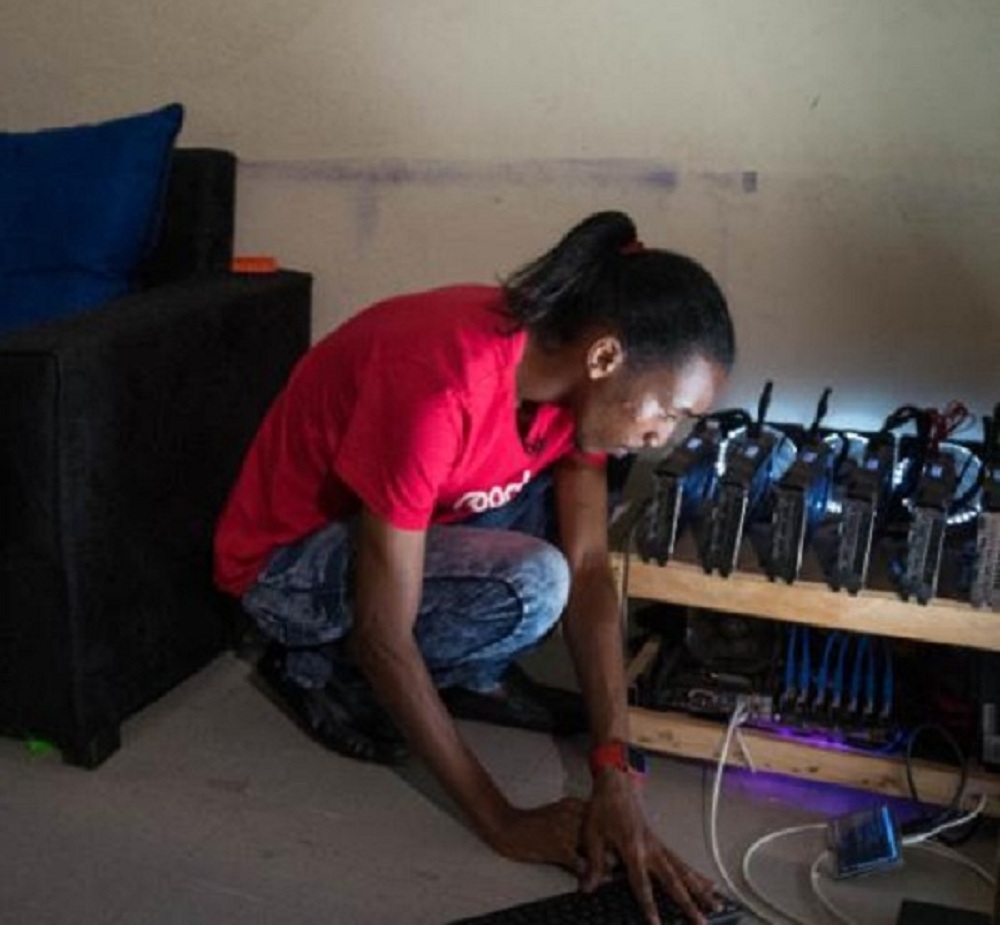 Eugene Mutai is well aware of the risks of mining virtual money. “Sometimes I ask myself: will the bubble pop? He’s right to be — cryptocurrencies are volatile. That hasn’t stopped him from operating in this shadowy and controversial corner of the global financial system.

A few years ago Mutai was working odd jobs on farms in rural Kenya. Now he’s a cryptocurrency miner in Nairobi. His apartment — where he mines — is dimly lit blue and drowned with the low drone of a self-made cryptocurrency computer rig.

Mutai began researching cryptocurrencies last year. “I was curious about what was making these alternative coins drive. Bitcoin was hard to mine by that point in time,” Mutai tells CNN. There were already many Bitcoin miners. Instead, Mutai started mining Ethereum, a similar but less well known cryptocurrency.

For Mutai, internet-based currencies are revolutionary. They open up a world of finance that might not have been accessible for a self-taught tech-obsessed kid from Kenya with no college degree.

It’s also a nefarious world of online hucksters and frauds. And that’s the chance Mutai takes. Is the gamble worth it?

Essentially, a cryptocurrency is an encrypted digital coin. Transactions made with these digital coins are added to a growing database known as a blockchain – and that’s where the miners come in. “The way I understand what mining cryptocurrencies is, is that it’s basically supporting the network and helping the verification and adding of transactions to the whole blockchain database,” Mutai says.

READ: How hackers are mining the web for crypto-currencies

Put simply, instead of companies like VISA and Mastercard securing transactions, miners do. How then does Mutai make money? “There’s something known as a Hashrate, which is basically how fast can you verify transactions, and eventually help the transactions to be added to the block.

“The more powerful your computer, the more transactions you can verify, the more money you can make. Then for every transaction verification, you get something called a share, which is translated into the cryptocurrency that you’re mining,” Mutai tells CNN.

Mutai says he makes about Ksh82,474 (US$800) each month. Once the mining machine is up and running, aside from the regular power-cuts, he can kick back and let the computer do the work. However, the huge amounts of electricity needed to run the sort of powerful computers capable of mining can be a hindrance.

“My electrical cost is probably 20% of my entire earnings, but it’s completely nullified by the cryptocurrency doubling in price,” Mutai says. Mutai is an evangelist for cryptocurrencies. He believes they could one day replace standard currencies. “It will be a long battle with governments and financial institutions,” Mutai says.

Cryptocurrencies could be revolutionary or a swindle. But for now, with Bitcoin worth more than gold, there’s a new different kind of — digital — miner chasing the treasure.

Life for Mutai hasn’t always been plain sailing. When he was a teenager he lost both his twin brother and his grandmother around the same time. His mother spiralled into depression and they moved 600km away from Nairobi.

They were tumultuous times. Mutai borrowed his friend’s Nokia Symbian S40 mobile phone and taught himself to code on it. Eventually, he moved back to the city to pursue technology further and in 2016 was named Kenya’s top developer by Git Awards.

Mutai is part of a growing group of African developers and entrepreneurs engaged in cryptocurrency activities. BitHub, an incubation hub for internet-based currencies, is the center of Nairobi’s cryptocurrency scene.

Tech entrepreneur John Karanja founded BitHub in 2015 and runs workshops on blockchain technologies for young developers. They also do training across five African countries. “For young people it’s an opportunity for them to learn about cryptocurrencies, potentially helping them access global markets,” Karanja tells CNN.

ALSO SEE: These will be the 32 most powerful economies in the world by 2050

Digital coins are also attractive for those living in countries with dysfunctional currencies. In Zimbabwe the price of Bitcoin soared to become the most expensive exchange rate worldwide, on the Harare-based trading platform Golix.

Cryptocurrencies are riding high, but there are doubters. Jamie Dimon, Chief executive officer of bank JP Morgan, says Bitcoin is a fraud  and that “you can’t have a business where people can invent a currency out of thin air.

There also concerns about the security of cryptocurrencies. Last year $65m worth of Bitcoin was stolen from Bitfinex, a Hong Kong-based exchange, resulting in a 20% plunge of its value.

There are no central banks or regulatory authorities that oversee cryptocurrencies. Mutai is resolute: “Cryptocurrencies as a concept and the way they work is very revolutionary. Story Credit: CNN

READ: If you have any of these signs, you are a potential millionaire

NFTs vs Cryptocurrency: Which Is The Best?

Why Law Firms Are Integrating Bitcoin And Blockchain