Huawei Technologies, Safaricom and women in Techonolgy in collaboration with United Nations Population Fund (UNFPA) have rolled out a life skills programme to 15 girls from Samburu Girls’ Foundation in Samburu County.

Female staff members from the three organizations mentored the girls in career take up along with practical professional skills.

Safaricom &Women in Technology further highlighted the need for more girls to pursue more Science and Mathematics subjects that for a long time were viewed as only for men.

Huawei Technology that has keen interest in youth mentorship as a form of personal development provided an opportunity for the girls to learn on a very inter-personal level by meeting people who they aspire to emulate.

Speaking during the mentorship programme event, Huawei’s Head of Public Affairs Adam Lane pointed the importance of technology in increasing access to relevant resources and information.

“We have donated Matebooks, laptops and an internet router over the years, as part of our contribution towards ensuring that the girls have access to education and other information such as college opportunities. Accessing the internet with support from Safaricom has opened their eyes to the world. They’ve used the devices to set up a journalism club so the girls are able to tell their stories to their communities and the whole world, thus helping change attitudes toward these harmful practices”, said Mr Lane.

[ Read: Ten firsts and bests from the Galaxy S10 ]

The girls were rescued from harmful cultural practises such as beading (to mark them for sexual engagement from an early age), Female Genital Mutilation (FGM) and child marriages by Samburu Girls’ Foundation.

Some of the girls found their way to the foundation by escaping from homes, through teachers, police and children offices intervention to the centre led by Dr Josephine Kulea.

Through the foundation, the girls are given a safe place to stay and receive psychological support through counselling. The girls have overcome incredible challenges in their lives and have inspirational stories of hope. They also have a clear message for others in Kenyan society about the importance of eradicating these harmful practices and ensuring all girl receive a full education.

The Samburu Girls Foundation Head of Communications Jeremiah Kipainoi lauded its partners for their role in transforming the lives of the girls in the community.

“The livelihoods of the girls at Samburu Girls Foundation has been transformed since partners such as Huawei, UNFPA and Safaricom & Women in Technology came on board. Through their support, the girls have become empowered through education and have a place where they safe to call home that is safe far away from some cultural practices such as FGM. This has not only transformed lives of the girls but also of the communities around who now know that girls can be more”, said Mr Kipainoi.

Samburu Girls Foundation was started in 2011, and has over the years succeeded in to rescuing over 1,000 girls from Samburu, Isiolo, Laikipia and Marsabit counties.  The girls at the foundation have further been given a chance to continue with their education from primary to tertiary level. 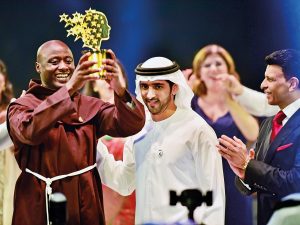