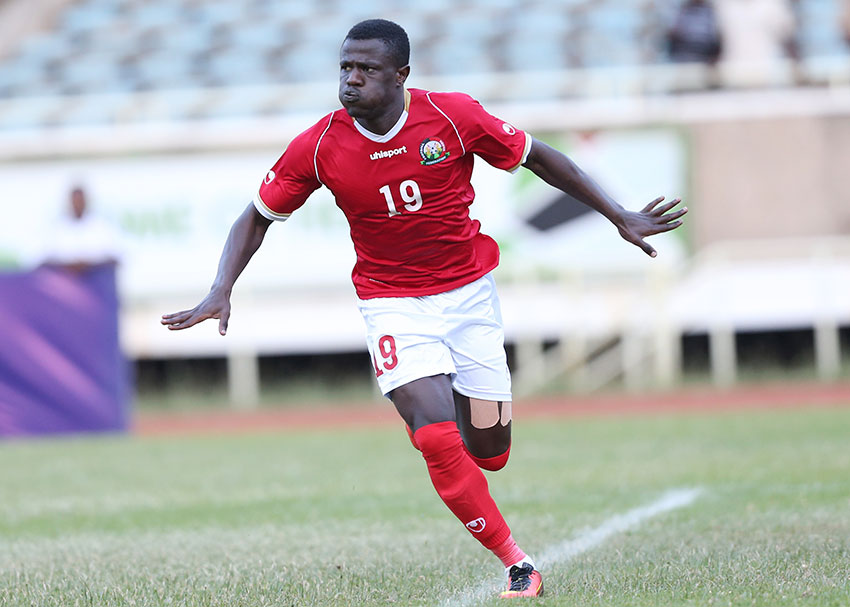 Harambee Stars' winger Paul Were celebrates his goal against Liberia in a past match. He is among the players called to represent the country at CHAN qualifiers. Photo/Courtesy

After displaying a not so good performance at the African Cup of Nations, Kenya’s national team Harambee Stars are graced with another opportunity to represent the country in a continental tournament.

However, Stars have to go through the qualifier stage before finally making an appearance at the Africa Nations Championship (CHAN). Kenya’s first hurdle en route to CHAN is neighbours Tanzania as the two are set to face off on July 28 in Dar es Salaam.

Coach Sebastien Migne has named the provisional squad that will engage in preparing for the match after which the final squad to travel to Dar will be named.

After veteran Harambee Stars striker Allan Wanga announced his retirement from football, the French tactician had to look at other options to bolster his attack. Especially because top Kenyan attackers like Michael Olunga, Jesse Were and Ayub Timbe will not be available for selection as CHAN only features locally based players.

Ulinzi Stars custodian James Saruni is the surprise inclusion alongside Kariobangi Sharks’ youngster Sydney Lokale who has taken up the place of Allan Wanga.

Surprise omissions are Bandari FC goalie Farouk Shikhalo who was part of the team that represented Kenya at AFCON alongside his teammate Hassan Abdallah. The two are on the transfer radar as they have been recently linked with possible moves to foreign clubs. Shikhalo is linked with Tanzania’s Yanga FC while Abdallah is linked with a move to South Africa’s Maritzburg United. Once they complete these moves, they will not be eligible to represent the country at CHAN.

The team reports to camp on July 19 ahead of the first leg set for July 28 in Dar es Salaam. The return leg will be played at Kasarani on August 4.

The aggregate winner of the two-leg qualifier will meet either Ethiopia or Djibouti in the second and final qualifying round, to be played on a date set to be announced by the Confederation of African Football (CAF).