Asbel Kiprop has gave up on his athletics career as he dives into motorsport. Photo/ Sports illustrated

Three-time world champion and former Olympic 1500 metres gold medalist Asbel Kiprop has hang his athletics boots as he looks to join a ‘sport without doping conspiracy’.

Kiprop, who is currently facing a four-year ban from athletics after he was found guilty of doping, announced on his social media accounts that he will be joining motorsport. The 30-year-old sportsman said that he is ready to taste the waters of a different sport.

The former Olympic champion has been learning about motorsport racing from veteran rally driver Abdul Sidi who says Kiprop is ‘desperate’ to make the career switch. Kiprop dominated middle distance races during his prime but his fortunes dwindled after he failed an out of competition test.

In his post, Kiprop said that he was glad to join motorsport because it is not characterized by doping conspiracy.

His newly found motorsport trainer said that Kiprop is determined to make history and become the first ever World-renowned athlete to change his career to motorsport.

“Asbel Kiprop, the former World and Olympic 1500m champion is looking at Abdul Sidi- Rally Advisor (ASRA) to help change his famous career to become the next Rally driver. Kiprop, whom I first met in Eldoret in 2013 during one of the ASRA sessions is determined to make history as the first-ever World-renowned athlete to become a rally driver. Kiprop is currently working as a Police Inspector at the Kiganjo Police Training Collage,” said Sidi.

Things went from worse to worst for Kiprop in April last year after the International Association of Athletics Federation (IAAF) Disciplinary Tribunal banned him for four years.

Kiprop had been suspended in 2018 after testing positive for Erythropoietin (EPO), a blood-boosting substance which increases the production of red blood cells, encouraging more oxygen flow in the body.

The athlete did not take in the news well as he refused to take the Adverse Doping Result Verdict (ADRV) lying down. He stormed social media crying foul accusing AIU of a personal witch hunt. He maintained that his original samples had been tampered with by officials who he claimed were punishing him for not being generous enough with the money he gave them.

“I have been left to fight this on my own. I have had no support even from my fellow athletes, some who have questioned my integrity in public,” Kiprop posted on his social media accounts after the results of his tests were out.

Kiprop’s four-year ban was catastrophic for him as he reportedly sunk into depression when he learnt that he could never grace the running track with his presence ever again. At some point, he threatened to use his firearm to ‘earn justice’ through a post on social media.

“I pray to National Police Service to dismiss me now. Before I use their machinery to earn myself justice. Kindly, IAAF come take your medals. I don’t need any on my house wall,” Kiprop tweeted last year. 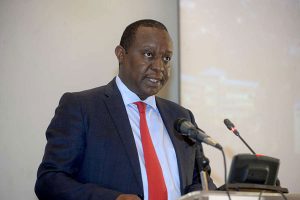 Court Suspends Rotich Corruption Trial
The case will be mentioned after 30 days.