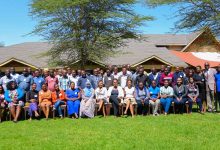 Experts have come up with ways that will reduce tobacco harm to smokers among them being the e-cigar (electronic cigarette), a handheld electronic device that tries to create the feeling of tobacco smoking. It works by heating a liquid to generate an aerosol, commonly called a ‘vapor’, that the user inhales.

This was announced in a two-day journalist workshop in Naivasha dubbed ‘Towards a smoke-free world’ organised by Oxygene PR and sponsored by Philip Morris International, a world leader in cigarette manufacturing.

“Our priority is clear – to switch, as quickly as possible, hundreds of millions of adult smokers to less harmful alternative than continued smoking. We are already making these new products available. Since 2008, we have invested over Ksh 300 billion (USD3 billion), employing over 400 world-class scientists, engineers and technicians.  Over 3.7 million consumers have switched to the first of our smoke-free products,” stated Philip Morris International.

Among the speakers of the function was Dr Tendai Mhiza, a Continental lecturer and a permanent member of the Gordon Institute of Business Science (GIBS) faculty. She emphasised on the need to embrace new methods that will be less harmful both the active and passive smokers.

“Tobacco use kills over seven million people annually; hence it is seen as an epidemic. 95% of tobacco related complications are caused by the smoke from tobacco. Technology is bringing us ways to satisfy the smoker without using the smoke,” said Dr Mhiza.

“The best thing a smoker can do is to quit smoking. However it has become one of the hardest things for most smokers hence switching to less harmful ways of smoking becomes the solution to such people,” she added.

According to Ade Adeyemi, founder and president of Leadership Impact Dynamics, the society should be working towards a smoke-free smoking, which will save both the active and passive smoking. “People smoke for nicotine but die of tar (smoke). Tar is harmful but not addictive but nicotine is less harmful yet addictive. We can find ways of extracting nicotine for smokers without exposing them to smoke,” said Adeyemi.

The World Health Organisation (WHO) estimates that there will be more than two billion smokers by 2025. In 2015, over 1.1 billion people smoked tobacco. “Far more males than females smoked tobacco. Although it is declining worldwide and in many countries, the prevalence of tobacco smoking appears to be increasing in the WHO Eastern Mediterranean Region and the African Region,” states WHO.

It is estimated that 5.8 trillion cigarettes were smoked worldwide in 2014, a number which is set to rise in the near future. According to WPRO, about a third of the male adult global population smokes.

Smoking related-diseases kill one in 10 adults globally. By 2030, if current trends continue, smoking will kill one in six people. Every eight seconds, someone dies from tobacco use.

Morris announce that they’ll be soon launching four product platforms that can meet the varying preferences of adult smokers that can help them switch to less harmful smoking habits. “In pursuing our vision of reduced-risk products, we are eager to see measures introduced that drive large scale switching as quickly as possible. We are confident that the right mix of government leadership and commercial initiative will dramatically accelerate efforts to reduce the health burden of smoking.”