The hearing of a case in which a man has been charged with forging Naivas Supermarket vouchers has been postponed until next year. Comedian Eric Omondi, who was a v****m of the f***d, has been listed as a star witness in the case where the man lied to him that he was a Naivas.

Milimani Law Courts Senior Resident Magistrate Jane Kamau adjourned the case against Ten Chege Muchai to February 24, 2022 after the court was informed that the complainant, Naivas Supermarket, was not ready to proceed with the hearing.

According to court documents, Ten Chege Muchai has been charged with making a document with intent to defraud. Jointly with others not before the court, they are accused of making Naivas Gift Voucher serial number 1326586 and bar code Ksh50,000 dated 2/6/2020 purporting it to be a valid Naivas Gift Voucher issued by Naivasha Supermarket Ltd Westlands branch.

The vouchers were given as promotional material to comedian Omondi by Howlow Limited, a company owned by Chege.

According to court documents, Mr Chege convinced the comedian that he was an agent of the supermarket and when Eric Omondi went to film an advert in a Naivas store, security intervened and stopped the filming.

>> Truth About What Churchill Did To Me – Eric Omondi

According to the statement filed in court by Paul Minai from the supermarket, Mr Omondi’s production team also tried to use a fake voucher created by Ten Chege to buy goods from the store.

“Security called the police as filming was not authorised and a false financial instrument made without consultation with Naivas was being fraudulently utilised,” reads a statement filed in court by the investigating officer. 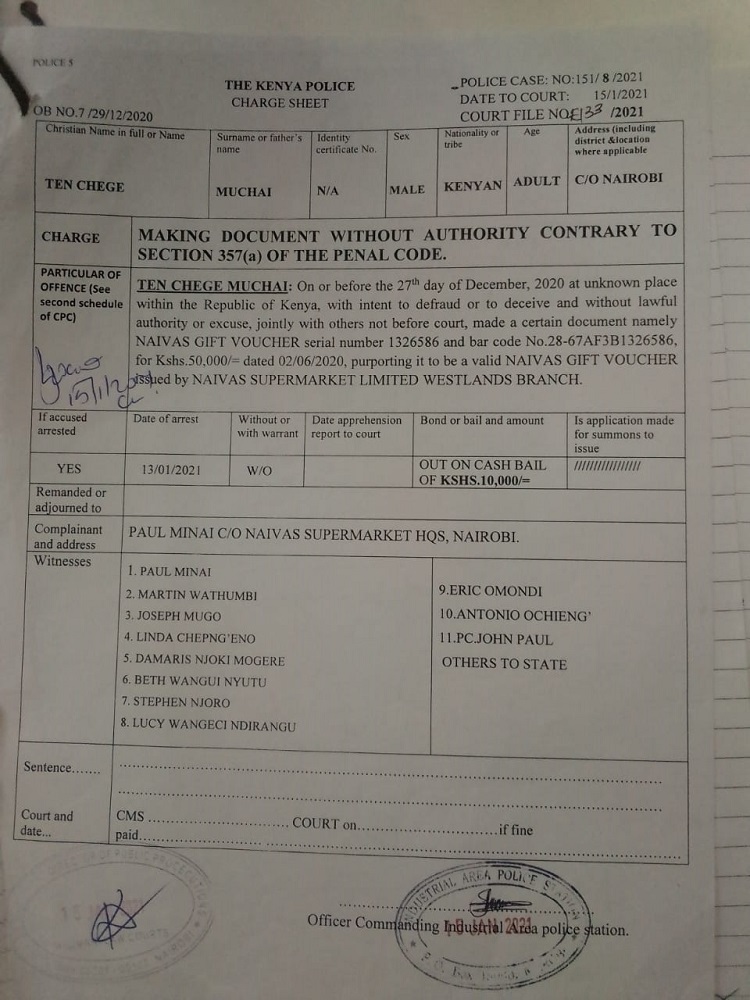 Naivas reported the whole matter to the police and the case is ongoing. Mr Omondi and his team are listed in the charge sheet as witnesses against Ten Chege. The accused has been released on a cash bail of Ksh30,000.

>> A TV Industry Insider Crosses Over Into PR

Exceptional Brands That Have Earned Kenyans’ Loyalty in Q3 2021