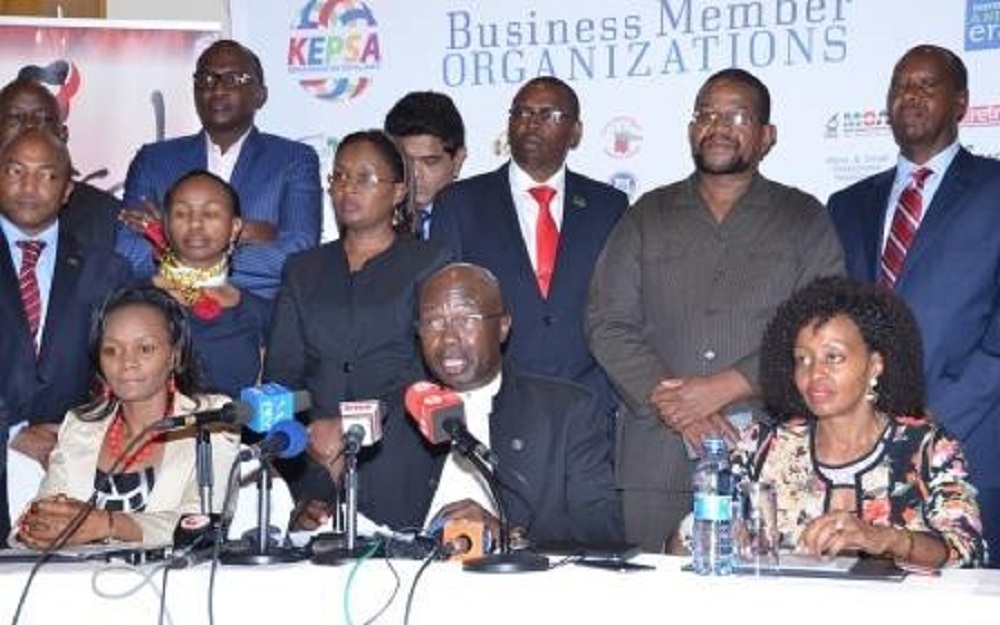 The private sector has lost Ksh 700 billion over the last four months as a result of intense electioneering in the country.

In a statement issued ahead of Thursday’s fresh presidential election, the Kenya Private Sector Alliance (Kepsa) expressed concern that more losses are set to be incurred if there is an eruption of election-related chaos.

Kepsa trustee Patrick Obath, says the most affected are small and medium enterprises, though he hastened to add that all Kenyans suffer, as the economy is buffeted by the uncertainties arising both from the election itself, and from any associated chaos.

“This is why we have consistently called Kenyans’ attention to the disastrous economic consequences of the present uncertainty which affects all Kenyans. The Private Sector having reviewed the loss and has estimated it to be about 10 per cent of the GDP equivalent to Kshs 700 Billion,” he said.

“In doing so we have been acutely sensitive to Kenyans’ hard won rights of protest, of gathering and of picketing, but have also called for the rights of other Kenyans equally to be respected. In this regard we appeal once again to our s*************s to ensure that in keeping or restoring public order, they remain sensitive to the need not to stifle genuine and peaceful protests, and always to bear in mind their operating orders to use minimal force,” said Obath.

He added this year’s election has raised fundamental questions about where Kenya is headed, saying it is clear that, regardless of the outcome of the Presidential election, when it’s over, Kenya is overdue a national conversation.

“We all thought we decided once and for all our national direction when the current Constitution was promulgated in 2010, but it is now evident that there are a significant number of Kenyans dissatisfied with the outcome of the unfolding of this Constitution. This is not unusual; constitutions embody a people’s hopes and dreams, and these evolve, and can and do change over time,” he said.

“Ours is a living Constitution, and contains avenues for change. However, in looking at whether the Constitution is fit-for-purpose, we must ensure we act within its confines, not outside it, and within our existing laws. We cannot afford to be a lawless country,” he added.

Kepsa wished Kenyans who wish to vote and those who wish to choose, for whatever reason,
not to vote, a peaceful Election Day,  urging them demonstrate our maturity by allowing all to
proceed as the wish to do, without infringing on the rights of others.

He noted that over the past few weeks, the private sector has come out to call on Kenyans to allow independent institutions, including and especially the Independent Electoral and Boundaries Commission (IEBC) and the Judiciary, execute their mandates, and in turn that these institutions remain and be seen to be non-partisan.

In addition, private sector players have been consistent that all Kenyans have rights but those rights come with responsibilities, and that the Government ensures security is provided for all during and after this election and that any aggrieved parties use our established disputed resolution mechanisms, principally the Judiciary, to seek redress.

In addition, Obath said that the Supreme Court was very clear in its orders that the IEBC organise an election within 60 days of September 1, 2017 and, until the Supreme Court vacates this Order, it behoves all Kenyans to obey it.

“We are aware of the issues raised by those who do not support the holding of this election. These Kenyans have a right to hold these views. We repeat our call to all such Kenyans, and to any others Kenyans who may feel aggrieved for whatever reason, to resort to the Judiciary to address their grievances, as indeed several individuals and groups have already done during this election. We urge all to abide by any rulings that come out of the various Presidential election-related cases now in progress,” he said.