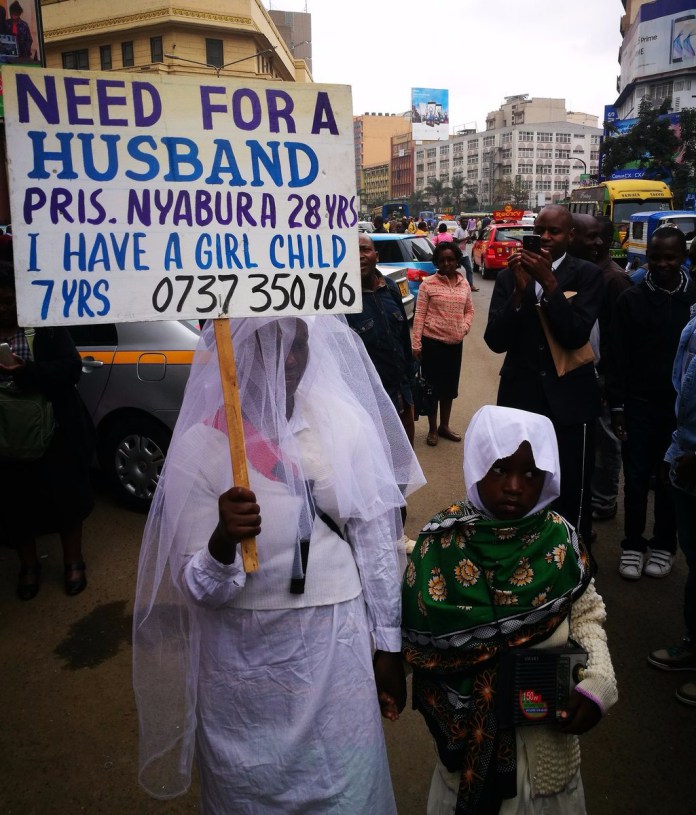 A 28-year-old lady has set the internet ablaze after she took to the streets of Nairobi early today seeking to get a husband. Priscilla Nyabura was photographed by different people  holding a placard indicating her need for a husband and her phone number for interested parties.

What could have pushed her to go to the streets still remains unknown, but poverty, loneliness and possibly unemployment. Wearing a wedding gown, signalling her readiness to tie the knot, she was even accompanied by her seven-year old daughter, perhaps a sign of transparency and proof of fertility.

Nyabura, accented version of Nyambura, a common name for ladies among the Kikuyu community, has redefined the search for a man to live with, through her open-air advertisement. There have been cases of eligible individuals putting advertisements in the classified sections of the papers, but it hasn’t been this extreme.

The behaviour is unusual, but the reasons behind it could be the hard economic times complicated by changing social structure where the number of eligible bachelors is shrinking. Most men are cruising past marriage age range of 24-35 without wives, choosing to stay single and avoid the social and financial responsibilities that come with settling down.

This has left many women eligible for marriage without reliable partners. What’s often available are the ‘hit-and-run’ types of men out for short term pleasures. An increasing number of women are growing up without the desire for a man, emboldened by economic empowerment and discouraged by the high propensity for being hurt or abandoned by a once-committed man.

READ: Kenyan men are the most faithful in Africa, survey shows

Ms Nyambura’s case is an explosion of frustrations among ladies in getting a long-term soulmate in a country where both men and women are searching for financially stable partners. But due to the reality of poverty and unemployment in Kenya, getting a mate has become about as hard as finding a virgin in a seminary.

Government statistics show that 46% of Kenya’s population of 46 million lives below the poverty line, leaving a huge segment without means for earning a decent living. Most young men are left without the most important resources that attract women: money and power.

Access to basic quality services such as healthcare, education, clean water and sanitation, is often a luxury for many people, yet a necessity for good life that makes a marriage work. That by  no means indicates poor people don’t marry. Large segments of the population in Kenya, including the burgeoning urban poor, are married. They simply make the best out of their situation.

According to the Kenya Demographic and Health Survey 2014, out of a national population of about 38 million, over 23.4 million, or more than half, have never married.

But the modern lady looking for good life is not read to make the best out of a bad situation. They want the best life can give: lots of money, nice house, good food stored in a fridge and cooked on a huge gas burner before being served on glittering glass plates, then washed down with wine or whiskey.

Ladies find themselves in a pool of dilemma of morals versus money. Some hope for – and, at times are lucky to get – wealthy husbands. And there is always a group of men from the middle class and the high end segment ready to ‘help’ such ladies for sexual benefits, which has spawned a new tribe of men called ‘sponsors’ – the guys with means who care less about love and moral and thus ready to finance a lady’s desired lifestyle in exchange for bodily pleasure.

On the other side, so-called ‘good men’ often impregnate ladies but soon turn deadbeat dads. They then embark on getting the next catch, often from the same poverty stricken group, who will not give much trouble once they smell a thousand shilling note. This class is also a preference since they rarely seek legal redress in case they are abused. They just opt to move on to fend for themselves or hope another man will be sympathetic enough to take care of them.

What follows are use-and-dump scenarios. Others who might be willing to marry them are their fellow poor chaps, who are not even capable of taking care of themselves. The young single mothers eventually lack somebody to marry them. They have to pay rent, eat and take the child to school. The options for survival are fewer. Many get into the vicious circle of searching for the elusive tall, dark and handsome (rich) men.

Those who fear public scorn use online dating sites where the situation is worse with strangers who exploit their desperate conditions to prey on women. Others get their ‘love’ on social media but soon find that they are not compatible.

Nyambura decided to invent a new way of getting a marriage partner, a shortcut of some sort, redefining the art of getting married by removing the bliss of dating and courtship, which can take years and many litres of coffee and other drinks.