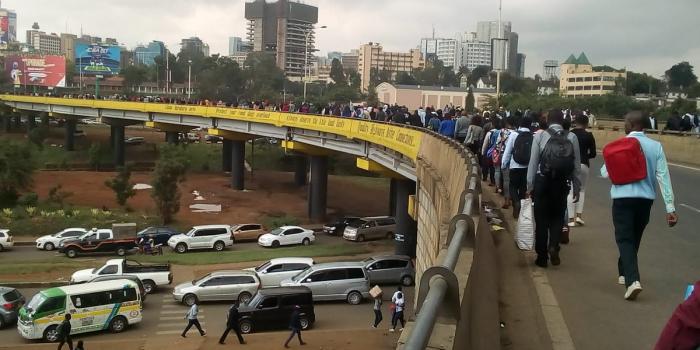 Nairobi City residents who work in the city centre and use matatus were the major casualties on Monday after Nairobi County government effected the notice that banned Matatus from accessing the Central Business District (CBD).

The move according to County officials is aimed at decongesting the capital to be more appealing and business friendly.

A spot check by the Kenya News Agency (KNA) showed thousands of city dwellers trekking into the city centre, jamming the available footbridges to get to their offices and business points.

In an interview with KNA, Jane Wairimu who runs a beauty shop in town however was optimistic that the ban would bring order to the CBD which she said is too congested.

“Sonko is doing a good thing. Nairobi is looking up and things will work out,” Jane said while jostling for space to get through to town using the jammed Ngara footbridge which has now been subjected to quality test by the many users.

However some residents like John Mutiso felt that the County Government should have provided alternative means from the termini to the CBD with some raising concerns on the options available for persons living with disability.

Governor Mike Sonko who appeared today before the Senate’s Public Accounts and Investment Committee has apologized to commuters for the pain caused by his CBD matatu ban adding that it is not meant to punish residents but to bring order in the city.

“It is a good thing. All good things are painful. The aim is not to punish the same people who voted for us,” said the emphatic Nairobi Governor.

He said his administration has invested heavily in the construction of termini in Ngara and Muthurwa which are now ready for use, further calling on Parliament’s support to ensure the ban succeeds.

According to him, plans are underway to provide alternative means for commuters including addressing some of the pertinent issues like safety of the pedestrians who are now prone to muggings or being hit by speeding vehicles.

In a move aimed at decongesting the capital city the County government in a notice published in the dailies said that it has established 11 terminus that the matatus will be using henceforth.

Matatus from Kiambu, Thika Road, Kipande Road and Limuru Road, will pick and drop passengers at Fig Tree in Ngara while all high capacity buses from upcountry will be stationed at Machakos Country bus next to Muthurwa market.

Public vehicles plying Mombasa Road and Lang’ata Road will now drop and pick passengers at Hakati terminus while those from Jogoo Road will now terminate at Muthurwa with those plying the Ngong Road will now be expected to stop at Railways.

The notice signed by acting County Secretary Pauline Kahiga stated that all operators are required to take note that the above changes take effect as from today further directing that all other gazette notice had been declared null and void through this.

Previously, such moves hit a snag with matatu operators opining that the listed termini dont have the capacity to hold all the vehicles.

In April, matatu operators had threatened to ground operations if City Hall banned them from the CBD despite a report that showing that Nairobi remains one of the worst hit by traffic congestion in the world according to 2017 Traffic Index.