Football is easily considered a man’s sport. Even though there is women football and gender equality campaigns that champion for more ladies to be involved in the sport, it is still seen by many as a man’s sport.

It is easy to find a girl who plays sport but it is near impossible to find a lady who is in a managerial role in football. Especially the football governing bodies which are highly male represented.

However, in Kenya, there is an iron lady who has thrived in the football World as the top boss and is doing wonders. Business Today caught up with Christine Karimi who is the Chief Executive Officer (CEO) at Dream Football in Kenya and Africa in general.

Well, Dream Football is only represented in Kenya but the firm plans to expand to other countries in the continent. The 37-year-old is the CEO in Kenya and will remain the CEO in charge of all branches across Africa.

It was her passion for sports, technology and working with kids that spurred her to lead the International Sports firm. Christine was initially a technology enthusiast before she joined Dream Football.

It all started in 2017 when she attended a web summit in Lisbon, Portugal. As she was going through a section about technology and sports and met Dream Football representatives. Dream Football was first established in Portugal before opening the Kenyan branch.

“We went to the section of technology and sports and I saw what they were doing. They were dealing with children and I just loved it,” Karimi recalls, “W stood there for almost two hours talking about what we can do in Africa to promote football. We decided that Kenya was going to be the first showcase before we expand to other countries.”

A lady in a Male-Dominated Sector

She had never played football before but the passion for the sport was burning inside. However, she had done everything relating to football except play the sport. She was more interested in technology but it still brought her back to football.

Getting involved in the game she found out that it is mainly dominated by men and she had to adjust. However, she never looks at the negatives of it but rather focuses on the change that she brings to the game and its future in Kenya.

“I find myself surrounded by men most of the time. Sometimes you are in a gathering and people assume that you are just some assistant. I enjoy that though, I let people do their thing,” she narrates, “sometimes it is annoying but I don’t mind it really. It feels like an achievement.”

Karimi had to make herself fond of getting comments like ‘I didn’t know you are a lady’ and being doubted almost all the time.

“One thing you note about football is that it has a lot of respect. They respect you for who you are and don’t judge you much. They accommodate you in one way or another,” she commented.

“I have met some people who have doubted my capabilities in the role but I don’t pay attention to that. I don’t prove myself to them but I let my work prove itself,” she added.

The Christine Karimi led Dream Football will fly 14 children to Lisbon for a football training camp in April 2020. Her plan is to help talented children who come from underprivileged backgrounds to make it in football.

It is also among the firm’s aims to develop a football academy in Kenya in the near future. Before the end of the year, Dream football will open its second African branch in Congo. According to Karimi, the company plans on opening more branches in Africa and concentrate on developing the sport here.

She rose above the critics and is now achieving milestones. A lady who thrives in a male-dominated sector. 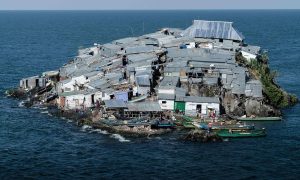 Mysterious Migingo Island Riches Threatening Kenya, Uganda Relations
The rock is a beehive of activity where fishermen and…