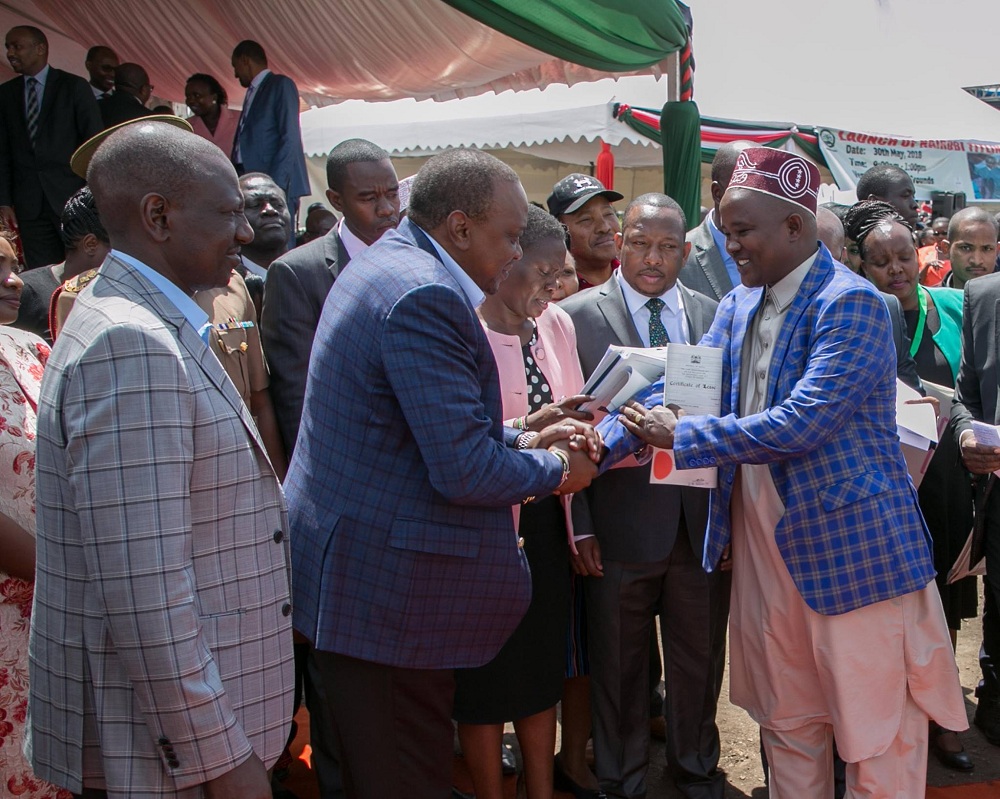 President Uhuru Kenyatta has said the Government will spare no efforts to recover all resources stolen from Kenyans through corruption  schemes.

Reaffirming his message on corruption, the President said all culprits will be prosecuted and jailed.

“There will be no mercy for the thieves. Their days are numbered. They will be prosecuted and jailed”, said the President when he launched the issuance of title deeds for Nairobi residents at Jacaranda Grounds, Embakasi East , Nairobi.

The Head of State cautioned Kenyans to stop using tribal sentiments to defend individuals caught in the web of corruption. He said all corrupt Kenyans must be identified as  individuals irrespective of the tribes they come from

“I do not want to hear anybody defending those caught in corrupt dealings. A thief is a thief irrespective of the tribe he/she comes from,” said the President.

President Kenyatta defended the historic handshake with Raila Odinga in March saying he had a right to talk with every Kenyan including the opposition leader.

The President said his main concern is about the unity of all Kenyans adding that the country cannot progress without unity and peace.

“Raila is a Kenyan. I have a right to talk to everybody. My aim and that of my Deputy (William Ruto) is to unite all Kenyans,”he said.

The President said  while he respects all Kenyans , he will not be bothered by  those opposed  and talking against the unity deal with Raila .

He asked Kenyans to stop pre-occupying themselves with unproductive politics and concentrate on peaceful co-existence and harmony.

During the function, President Kenyatta, who issued 50,000 title deeds to Nairobi residents, said the move will unlock the upwards of Ksh 20 billion through business and investment.

The President said this was just the beginning of the important exercise and will soon issue more titles for land owners in Nairobi County, where the exercise had not been conducted for many decades.

The President at the same time gave the Ministry of Lands, the County Government and other relevant agencies three months to sort the controversies engulfing the Embakasi Ranching Scheme so that its members can get their title deeds.

The President said some investors in the City lived in fear because they had put up buildings on parcels of land without title deeds. He said time had come for every Kenyan to get his/her right.

“For those to whom we have issued with titles today will know Nairobi is also theirs,” he said.

The President said for many years, Nairobi had been forgotten over the issuance of the land documents adding the last title deed in Nairobi was issued many years back.

President Kenyatta said the titles issued to Nairobi residents will make a huge difference to the beneficiaries.

Lands Cabinet Secretary Farida Karoney said her ministry targets to upscale the issuance of the titles to Nairobi people to 100,000 by the end of the year.

Before the Jubilee Government came to power in 2013, no more than six million titles had been issued across the country in 50 years.

President Kenyatta also announced the allocation of Ksh 4 billion to rehabilitate and construct all roads in Eastlands area.

He said this must be done before any other roads are considered in Nairobi and asked city residents to keep a watchful eye on contractors doing shoddy jobs.

The President said Ksh 3.2 billion had previously been allocated to the same roads but the work was never done.