President Uhuru Kenyatta during a past address to the nation. A new report has shows that the Managed Equipment Services (MES) project he launched in his first term is burdening the taxpayer.

For a moment during his State of the Nation (SoTN) adress on Thursday, President Uhuru Kenyatta had Kenyans on the edge of their seats appearing to be finally wielding the axe and ridding his cabinet off members embroiled in corruption scandals only to dampen the public’s expectations by declaring that no one will be given the boot until they are officially charged with theft of public funds.

The public was hoping that President Kenyatta would ask the CSs to step aside like he did during his SoTN adress in 2015 when former CSs Charity Ngilu, Davis Chirchir, Felix Koskei, Micheal Kamau and Kazungu Kambi were mentioned as persons of interest in an Ethics and Anti Corruption Comission (EACC) report.

Uhuru had been under intense pressure from politicians, the media, lobby groups and the public to sack the  cabinet secretaries under question but the president cleverly dismissed the idea asking the public to wait for investigative agencies to complete probing the different sets of scandals.

“I have been under pressure to say who am I sacking. I must however caution that the pursuit of the corrupt will be undertaken strictly within the remits of the law. It will not be done through vigilante justice and pitchfork protest. Though media narratives rally our resolve as they should, there will be no condemnation before one has been heard,” said President Kenyatta.

By doing so, President Uhuru Kenyatta bought the Directorate of Criminal investigations (DCI), EACC and the Office of the Director of Public Prosecutions (ODPP) more time to firm up cases against state officials widely presumed to be on borrowed time.

Cabinet Secretaries Henry Rotich (Treasury), Mwangi Kiunjuri (Agriculture), Eugene Wamalwa (Devolution and ASAL areas) have all been grilled at DCI headquarters on Kiambu Road in the recent past in connection with the loss of Ksh63 billion meant for the construction of Arror and Kimwarer multi-purpose dams in Elgeyo Marakwet County and Itare dam in Nakuru County.

Kiunjuri and Wamalwa were grilled for their roles in the awarding of the tenders during their stints as Devolution& Water and Irrigation CSs respectively.

{Read: State of the Nation: Uhuru talks up SGR, Education and SMEs}

Investigations into the dams scandal are complex as they require cooperation from the Italian government as the firm awarded tenders for the construction of the dams, CMC di Ravenna had already been declared bankrupt back at home.

It has been revealed that the firm was paid to ‘begin’ the construction of the dams without the designs and was also paid for work not done.

Uhuru also threw his weight behind DCI Director George Kinoti and DPP Noordin Haji who are facing an onslaught from politicians allied to Deputy President Dr William Ruto who have accused the two of ‘skewing’ investigations to scuttle the second in command’s 2022 presidential ambitions.

“I remain confident in our investigative and prosecutorial agencies to deliver and ensure that justice is served,” said Uhuru.

Ruto himself has also accused Kinoti and Haji of targeting him in the war against corruption, a position that has been echoed by his lieutenants, albeit more explicitly.

Kiharu MP Ndindi Nyoro has also announced plans to table a motion on the floor of the National Assembly to whittle down the DPP and DCI’s powers. 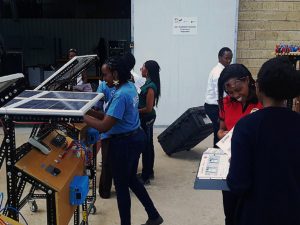 Sh1.5m grand prize up for grabs in national STEM students contest
The competition has been initiated amidst concerns that the quality…