Robert Mugabe, who died at 95, eulogised by President Uhuru Kenyatta who eulogises the departed Zimbabwean leader and directs that national flag be flown at half mast for three days. [Photo/Christian Science Monitor]

Amid flowing tributes in honour of departed Zimbabwe strongman Robert Mugabe, Kenya’s President Uhuru Kenyatta has directed that the national flag will fly half mast for three days.

In a Presidential Directive, President Kenyatta said the tradition, usually practiced as a sign of respect, mourning or distress, will be performed for a three day period for the Zimbabwe strongman who died on September 6.

Uhuru also paid tribute to the liberation leader, saying the country had lost a friend from a nation that is a close ally. “Kenya has lost a close friend, following the passing of H.E. Comrade Robert  Gabriel Mugabe.  I take this opportunity on my own behalf, that of my family and the people of the Republic of Kenya to offer my deepest heartfelt condolences to Mrs Grace Mugabe, the entire family and the people of the great Republic of Zimbabwe.”

Mugabe, who led Zimbabwe from 1980 to 2017, had been a controversial figure, dividing opinion among some who considered him a hero while others opined he was disastrous to the progress of the Southern Africa country.

“He was also an embodiment of the Pan African spirit, offering immeasurable assistance to his neighbour South Africa, in their struggle to end apartheid, and in his steady insistence that Africa’s problems required African solutions. He spent a lifetime challenging Africa to find its place and voice among the Community of Nations, and stand tall,” Uhuru added.

Raila also added, “Mugabe was a liberation hero who like others, made mistakes during his reign.”

Mugabe was Zimbabwe’s founding Prime Minister and President, ruling the country from independence in 1980 until 2017 when he was deposed amid controversial negotiations that ended with him receiving immunity.

His successor, Emmerson Mnangagwa, who had been his deputy, also expressed his “utmost sadness”, calling Mugabe “an icon of liberation”.

Mugabe, who had insisted that he did not want to live in exile but wanted to die in his home country, passed on in a hospital in Singapore. He was 95 years of age.

Hailed by some as a Pan-African who regularly wanted the best for the continent’s people, Mugabe also faced international outcry, particularly from the West, who criticised his regime on many occasions.

In Africa however, Mugabe enjoyed cordial relations with many of the continent’s leaders. Uhuru also alluded to this in his statement when he said, “Throughout his tenure as President, H. E. Mugabe maintained close relationships with Kenya, visiting Kenya on several occasions...” 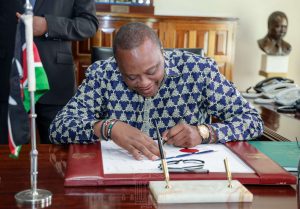 Left-handed People Have Special Brains, New Research Reveals
It was already known that genes have a partial role…