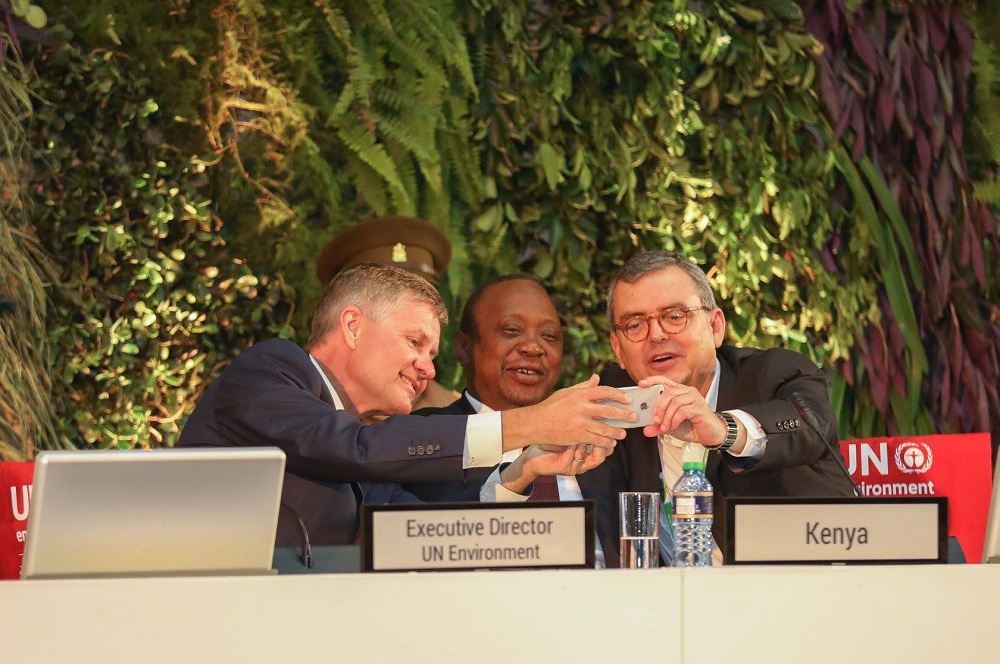 President Uhuru Kenyatta has hailed Kenyans for backing the ban on the manufacture, sale or use plastic carrier bags, terming it as proof that if citizens can work with their governments to end such a ubiquitous source of pollution, then they can move on to even bigger, more demanding targets.

“The ban was backed by fairly severe measures, as one might expect, given the gravity of pollution by plastics in this region’s land, air, water, and marine ecosystems. The ban may seem only a small step. In fact, it has already cut plastic pollution substantially,” President Uhuru said during the opening of the third session on the United Nations Environment Assembly at the UN Complex in Gigiri, Nairobi.

“Equally important has been its positive effect on public opinion. That the ban has held is proof that we do not have to give in to pollution: public action can make a difference,” he noted.

“We now know that maintaining high levels of ambition in f******g pollution is an achievable and positive undertaking. Let me take this opportunity to thank the many countries and organisations that sent us messages of support and encouragement in the pursuit of the ban on plastic carrier bags,” Uhuru said.

“We are proud of this achievement and we hope that our example will inspire other countries too,” the President added as he urged other nations not heed the skeptics, who say that all countries cannot protect the planet better by banning plastic carrier bags.

He said Assembly’s theme is Towards a Pollution-Free Planet’, could not be more fitting. In his speech, President Uhuru noted that not too long ago, the pursuit of prosperity was undertaken by nations without regard to environmental consequences.

“Few bothered to count the environmental costs, and even when they did, they went unheeded. Right across the world we can now all see the consequences of that careless pollution of the past. And, indeed, experts are predicting even more dire consequences if we do not act now. The world gathers here today because we have learnt an expensive lesson: unless our environmental riches are protected by all, there can be no lasting prosperity for any of us,” he said.

After the success of the plastic carrier bags ban, President Uhuru said Kenya will now move on to another major anti-pollution project –  hosting the East African Framework Agreement on Air Pollution building on the Nairobi Agreement of 2008.

“This agreement brought together 11 countries to develop actionable targets to address air pollution. In furthering the Agreement on Air Pollution, we hope to repeat the success we have achieved with the ban of plastic carrier bags, and we look forward to global support in this effort,” he said.

President Uhuru also underscored the need to protect the oceans, saying Kenya will bid to host the next Oceans Conference in 2020.

“In doing so, we look forward to your support and participation in the conference. Second, the true value of the blue economy remains unrealized, especially by many developing countries. Therefore, building up to the Oceans Conference of 2020 to which I just alluded, Kenya is looking into the possibility of hosting a global conference on the blue economy, during the last quarter of next year, 2018,” he said.

“It is our intention to work with interested nations, as well as the Special Envoy on Oceans of the Secretary-General of the United Nations, and United Nations organiSations. I would like to extend an open invitation to other nations and organisations to join us and co-host the conference in order to help all of us explore and maximise on the full potential of the blue economy in our world,” said the President.

President Uhuru also pledged to increase Kenya’s funding to UNEP  in order to support its programmes and encouraged other member states to consider raising their voluntary contributions to help the organisation discharge its mandate effectively.

He also expressed hope that renewed focus on reforms within the United Nations – led by the Secretary General António Guterres – will also strengthen United Nations Environment Programme, and in particular, the urgent efforts being undertaken to consolidate its headquarter functions in Nairobi.

The President also welcomed the planned expansion and modernisation of the UN offices and conference facilities, saying they were long overdue as they would ensure that the UNEP and all the UN organisations and entities based in Nairobi enjoy a better and more modern working environment.

President Carmona said through the plastic ban Kenya has become the hope for humanity. “Nothing stops Kenya from becoming known as the hope of humanity just as it is known as the cradle of humanity,” he noted.

He said he learnt with admiration that the ban on plastic bags in Kenya has resulted in renewed growth in paper and jute industries in Kenya and called on UN Environment Assembly to come up with implementable resolutions that can guide humanity towards intergenerational equity.

“We should not be indicted by our children and our children’s children for polluting planet earth,” said President Carmona.

President Granger said pollution knows no frontiers and the actions of people in one corner of the world will directly affect those in other regions, adding that eradicating pollution requires information, e*******n and communication strategies that informs all people about the fact that a clean environment is a right for all.

“A clean environment is a right for all and not an entitlement for a select few,” said President Granger.

UN undersecretary and Executive Director of UNEP, Erik Solheim, also praised the Government of Kenya for passing tough laws to control plastic use.

More than 4,000 delegates are attending conference which will run until Friday.