In a Trading Statement & Operational Update issued on Wednesday, Tullow said it has suspended trucking temporarily and will resume operations once the roads are deemed safe enough for transportation.

“The Early Oil Pilot Scheme (EOPS) remains on hold until all roads are repaired. Work at the sites continues, with joint venture partners and the Government of Kenya to progress the development project,” reads the statement.

As per its trading statement, the British Company projects that it will report pre-tax impairments and exploration write-offs of c.$1.5 billion (c.$1.3 billion post tax) primarily due to a  $10/bbl reduction in the group’s long-term accounting oil price assumption to $65/bbl.

“Since our December announcement, Tullow’s senior team has been working hard on a major review focused on delivering a more efficient and effective organisation. The fundamentals of our business remain intact,”

“Recent reserves audits demonstrate that we have a solid underlying reserves and resources base in West and East Africa, our producing assets continue to generate good cash flow and we retain a high-quality exploration portfolio,” said Ms. Thompson.

Kenya began trucking oil from Turkana to Mombasa by road on June 3, 2018, with the first truck arriving at the Kenya Petroleum Refinery Limited in Mombasa on June 7, 2018.

Kenya projects to flag off its second crude export by March 2020.

Travelling? Why You Should Have an Insurance Cover for Your Trip 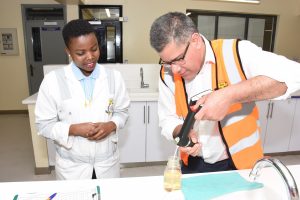