Gor Mahia striker Nicholas Kipkurui celebrates after scoring one of his two goals during the Mashemeji Derby 3-1 thrashing of AFC Leopards.

The fearless Ingwe (Leopard) shatters when it meets the Sirkal or maybe, it just turns to an ordinary cat. There might be a fierce rivalry between the two sides but the two their style of football is extremely different.

It was clear on Sunday that Gor is poised to be a regular continental tournament attendee while Ingwe is just a local league competitor. The class of players in Gor Mahia are way better than Ingwe’s players, who cannot make their presence felt in big matches. The difference between normal players and high-end ones is that the latter turn up in such matches. Gor players have efficiently learnt how to prevail when it matters the most.

Ingwe lost the match because they are not big game players. They started the game well but once they conceded, their chemistry disappeared immediately. Only a few players seemed to still have the heart to turn the game around. Paul Were, Brian Marita and maybe Abdalla Salim, who was substituted later in the second half, were the only players whose morale remained high through the match.

In the first half of Sunday’s match, Ingwe fans felt the vibrancy of the stadium and the players were holding up Gor Mahia well. For a few minutes, the match felt like a true derby with both teams creating chances back to back. In the 23rd minute, Nicholas Kipkurui tapped the ball home to what would be the start of Ingwe’s fall in the match.

Almost immediately, their morale diminished they begun to more or less chase the ball for the remaining part of the game.

The 3-1 thrashing was yet another reminder that the big guys at the den need to go back to the drawing board and repackage its squad.

The pressure they received from an energised Gor Mahia, who were feeling confident with their one-goal lead, was intense and Ingwe could not just take it. High pressing from Gor Mahia caused AFC midfielder Saad Tsuma to break giving away a weak backpass that was intercepted by Gor’s Rwandan striker, Jacques Tuyisenge who in turn set up a good pass for Kipkurui. He made no mistake as he almost tore the roof of the net with his thunderous finish.

At this point, Ingwe players became frustrated and were desperate for a goal leading to more mistakes. They were hit with multiple counters severally but, fortunately, K’Ogalo’s attackers lacked the finishing touch. In the 65th minute, Tuyisenge headed home a Kipkurui chip that had bounced off the top bar twice.

Ingwe only managed one goal in the match when a wayward pass from Joash Onyango in the last few minutes of the game saw Vincent Oburu intercept, before shooting straight home.

Ingwe had already all but collapsed after the second goal; the third caught them completely unaware as they were protesting to the referee for allegedly assuming a throw that was in their favour. They claimed the ball had gone out before the initial pass leading to the goal.

Ingwe have a great chance of improving their football next season especially under Rwandan tactician Andre Casa Mbung’o but it needs to spend more in the transfer window. Ingwe need to get high-end players that can compete with Gor and make the Mashemeji derby what it was before.

Read: Employee of the year wins car for being ‘self driven’ at work

Their January signings, Paul Were and David ‘Cheche’ Ochieng, have helped the team get back to winning ways. Adding a striker and an attacking midfielder to help Were might see Ingwe even challenge for the trophy next season. 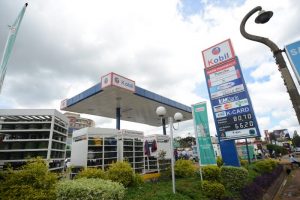 KenolKobil delisted after 59 years at the NSE
Oil marketer KenolKobil, who were suspended from trading at the…