Standard Group, seeking to energize its fledgling broadcast business, has pulled a veteran TV journalist from private practice to help it turn around its fortunes. Mr Peter Opondo, formerly head of TV at Mediamax Networks Ltd, has been appointed to the newly created position of Strategy and Content Editor for Broadcast.

This position puts Mr Opondo in charge of editorial content in all the Standard Group’s broadcast properties which include general programming TV station KTN Home, 24-hour news channel KTN News, KTN Farmers, Burudani TV as well as its radio stations Radio Maisha, Spice FM and Vybez Radio. Apart from KTN Home and News, the rest have yet to break even, battling not only for audience but adspend as well.

A seasoned journalist and media executive, Mr Opondo has more than 18 years experience in broadcast, print and digital media. He is currently a Media Strategy and Innovation Consultant and has previously held various senior positions at Mediamax Network Limited with his last role being Group head of TV and Digital. He has also held various roles at Citizen TV including acting Editorial Director and NTV Uganda. 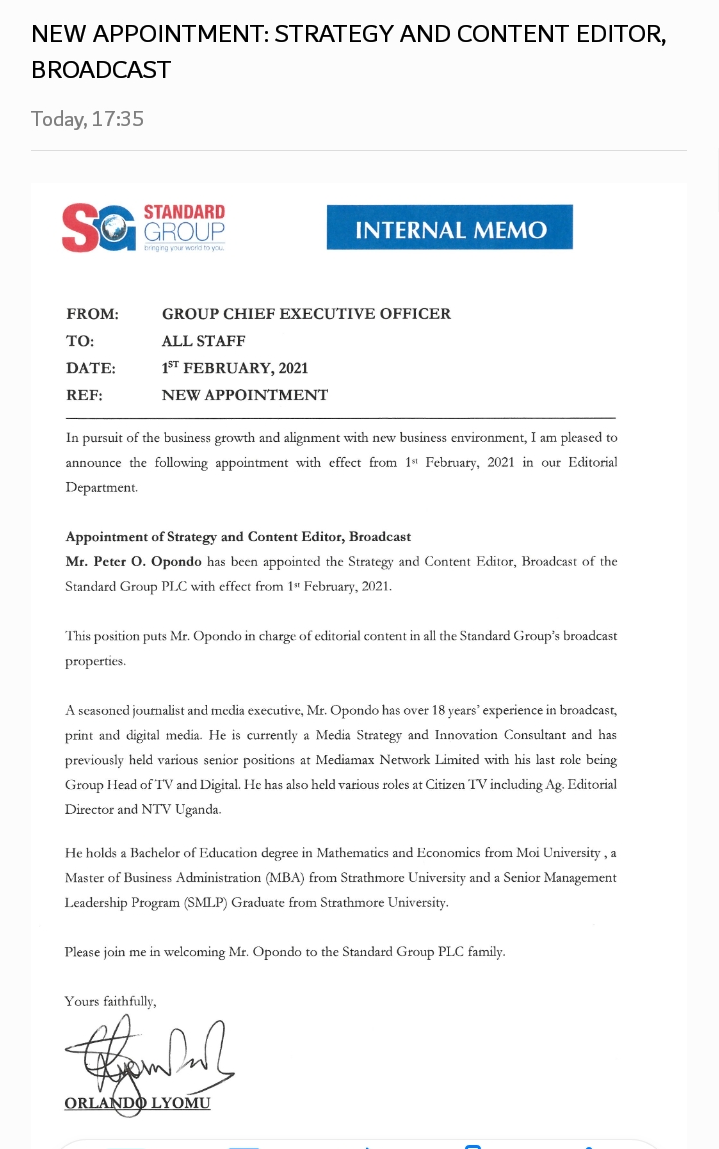 As far as talent goes in Kenyan media circles, Mr Opondo is a big catch for Standard Group, which is looking to juice up its broadcast outlets by improving content. At Standard he will work with Editor-in-chief Ochieng Rapuro has been trying to clean up the newsroom and bring in new talent.

Mr Opondo is known for introducing ruthless reforms which often end up with firing people he believes aren’t adding value.

He is believed to have behind deep surgeries at Citizen TV which saw big names pushed from the screens, as well as at Mediamax, where he oversaw one of the biggest retrenchments in media in which 160 employees were sacked at ago.

Opondo will, however, find Standard a different ballgame altogether. For a company firmly controlled by its major shareholder – the Moi family led by Baringo Senator Gideon Moi – who happens to be interested in running for the presidency, it will not be easy sail for a disruptor especially with an election looming.