Pictures of Cedric Shivonje. Sky News has retracted a report claiming he is the Kenyan who fell from London skies.

Sky News has apologised and retracted a story that identified the Kenyan who fell from London skies in June as Paul Manyasi shortly after another report contradicted the findings of the British broadcaster’s piece.

In an editorial correction issued on Thursday, Sky News admitted to relying on “misleading information” in the report filed by its Africa correspondent John Sparks hours after a report by Daily Nation revealed that the person whose photos Sky News relied on to base its report; Cedric Isaac Shivonje is currently being held at a Kenyan Prison.

“Sky News regrets that our reporting was founded on misleading information. In an interview with a Kenyan newspaper, that man (Cedric Shivonje’s father) has now admitted misleading Sky News,” reads the apology.

“However, we no longer have conclusive evidence that he worked for the cleaning company Colnet and we apologise to Colnet for suggesting the stowaway was one of their employees,” further reads the report.

In the Sky News report, Isaac confirmed to the British reporter that Paul Manyasi was his son and told Sparks that the personal effects retrieved from the Kenya Airways compartment were his.

Sky News said that it got the photos from Paul Manyasi’s alleged girlfriend Irene who also confirmed the retrieved personal effects were Paul Manyasi’s after being shown a bag recovered from the Kenya Airways plane.

Irene also positively identified Paul Manyasi after being shown an electronic sketch obtained from the British Metro Police shown to her by the investigative reporter. She however stressed that Paul Manyasi was “not as dark” as the person potrayed in the sketch.

The report identified the stowaway as Paul Manyasi who worked for Colnet, a cleaning services company contracted by the Kenya Airports Authority (KAA) to serve Kenya Airways.

Both companies vehemently denied employing a person by that name.

Isaac told The Nation that the only reason he played along with the conclusion drawn by the British reporter was to protect his son who he knew was in prison.

“When they showed me the photos, I told them that my son’s name is Cedric Shivonje Isaac. All this time, I knew my son was in remand but I could not reveal to them. I wanted to protect him,” Isaac told The Nation.

He further told The Nation that Sparks gave him Ksh20,000 after acquiring the information he needed from him.

See Also: The Kenyan Who Fell From London Skies 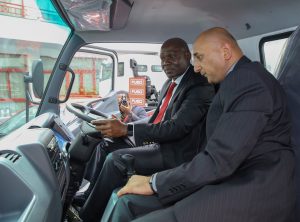