A Safaricom retail shop. Safaricom has joined the push to scale up private sector investment for sustainable development.

Safaricom moved huge volumes of shares at the Nairobi Securities Exchange (NSE) on September 25, resulting in a turnover jump of over 300%.

The mobile phone operator managed to arrest the low volumes experienced at the NSE over the course of this week, as the bourse saw turnover jump to Ksh1.2 billion. Trading had started slowly on Monday with a slump to Ksh172 million before inching upwards slightly to Ksh384 million yesterday.

With a total of 30.5 million shares transacted during the day’s trading at the Nairobi bourse, Safaricom’s stocks were valued at Ksh842 million. Its share price moved between Ksh27.40 and Ksh28, to eventually settle at Ksh27.55 at closing bell.

Safaricom’s turnover on Wednesday was higher than that of all the listed firm’s at the NSE combined for the previous two trading sessions.

The giant telco’s activity on Wednesday contributed to 69% of the day’s traded value. During the previous session, Safaricom had posted a value of Ksh117 million on the back of 4.2 million shares moved.

Safaricom also moved ten futures contracts, expiring on December 19, worth Ksh272,00 and concluding at a share price of Ksh27.29.

The Banking Sector had shares worth Ksh148M transacted which accounted for 12.17% of the day’s traded value.

The Investment sector had shares worth Ksh31.7 million traded which accounted for 2.60% of the day’s traded value. Centum moved 1 million shares valued at Ksh31.5 million at between Ksh31 and Ksh31.70.

Ksh4 million worth of shares were traded in the Insurance sector, accounting for 0.33% of the day’s traded value. Kenya-Re was down 1.02% to Ksh2.90, moving 1.2 million shares valued at Ksh3.6 million. 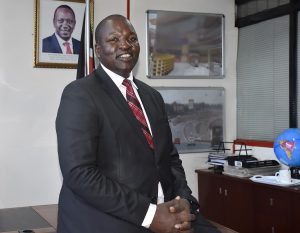 After Merger, Export and Branding Agency CEO Gets Down to Work
KEPROBA will provide national branding guidelines for stakeholders as well…