A variety of stakeholders including ICT Cabinet Secretary Joe Mucheru have advised Kenyan media managers to review their business models which are deemed to be too over-reliant on advertising revenue in the wake of poor business performance that has forced the media houses to layoff employees at alarming rates.

Speaking during the release of the Kenya Media Landscape Report 2019 co-authored by Reelforge, a media monitoring and research company and TIFA research, Mucheru challenged media managers to adopt research based business models if they are to shirk off the rut they are currently stuck in.

“Based on the numbers I have seen, the industry is in trouble. We need to sit down and discuss what do we need to do to fix that,” said Mucheru during the event held at a Nairobi hotel on Wednesday.

Conversely, Gil Kemami, the Chairperson of the Advertising Practitioners Association (APA) intimated that advertisers are no longer see value for money in placing commercials in traditional media.

“Advertisers still want to buy media but, they are demanding for return on in investment. That is the challenge,” said Mr Kemami.

The report shows that almost all forms of media are attracting less revenue at the moment compared to five years ago.

According to the report, consumption of news via newspapers and radio has been shrinking over the last five years while TV has taken a huge hit from disruption by online media.

Newspaper circulation has plunged by 33% between 2013 and 2018 signalling tough times ahead for the medium which was once the most popular platform in the country.

“The media is still giving us homogeneous audience, you go to the newspaper, which audience does the paper cover, it is not specific,” added Mucheru. 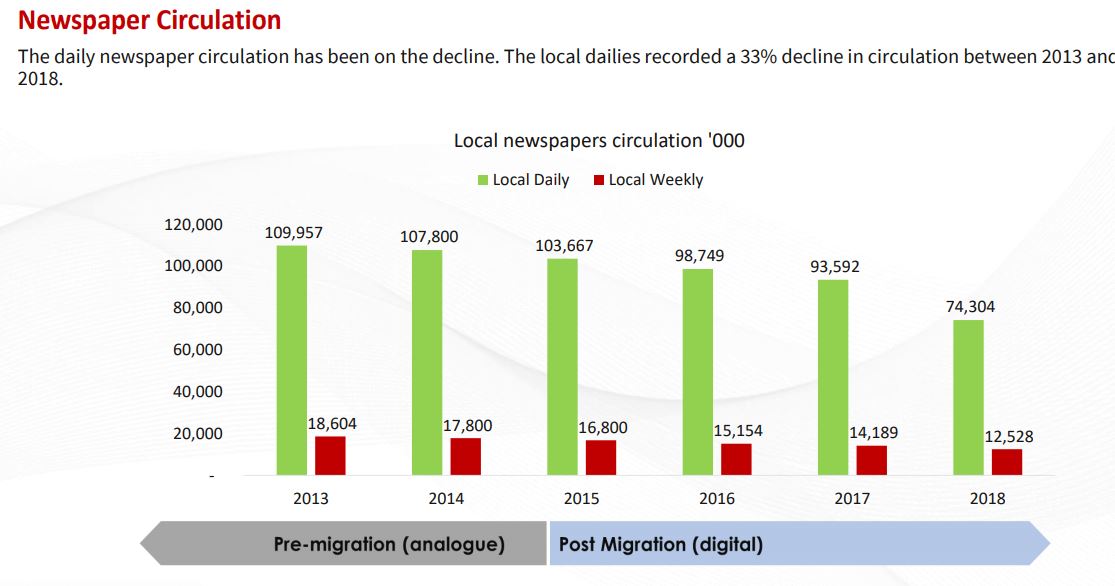 {Read: Governors in the limelight for all the wrong reasons}

Veteran journalist and Kenya Editors Guild (KEG) member Macharia Gaitho said that newspapers are yet to review their content to accommodate emerging audiences hence the massive decline in readership.

“Papers did not change content to cater to emerging audience. If we do cater for this then, the print will rebound.” said Gaitho.

Radio audience has declined gradually from 92% in 2017 to 66% in 2019. However, radio is still the most consumed media source in the country.

On the other hand, TV and online audiences have increased slightly from 50% and 30% respectively over the same period.

{See also: Gambling increasing in Kenya despite measures to curb it}

Increase on TV is driven by availability of more stations and the various platforms through which it is consumed– online and decoders.

Reelforge and TIFA attribute the bad business perfomance by media stations to accessibility of internet by a majority of Kenyans, increased competition and declining advertising spends on traditional media and the digital migration.