PwC Kenya in partnership with Kenya Bankers Association (KBA) has released a report on the total tax contribution of Kenya’s banking sector, giving Kenyans a view into their tax vaults, even though low profits reduced the payouts in 2018.

The first of its kind in Kenya, the report outlines the contribution by banks through corporation tax and irrecoverable VAT, and taxes collected as an agent of government such as PAYE, excise duty and withholding tax.

The report covers the 2017 and 2018 financial years and 38 banks and microfinance institutions which made a total tax contribution of Ksh108.1 billion and Ksh99 billion in 2017 and 2018 respectively.

Mr Titus Mukora, Tax Partner at PwC Kenya, said the study quantifies the tax contributions and draws connections between taxes and economic developments such as the interest rate caps and the adoption of technology by banks.

“Our analysis uses the Total Tax Contribution framework, where tax contribution is segmented into taxes borne and taxes collected,” Mr Mukora said during the launch of the report.

Taxes borne are those which are direct costs to a business such as corporation tax and irrecoverable VAT. Taxes collected are those that a business collects from taxpayers on behalf of the government such as PAYE and withholding tax.

According to the report, in the two years, banks contributed a total of Ksh207.2 billion in taxes. However, there was a decline in tax contribution from 2017 to 2018 attributable to reduction in taxes borne by banks, and in particular a reduction of corporation tax paid. This was a result of low profits reported in 2017 relative to 2016.

“The reduction in 2017 profits corresponds with the full year of interest rate cap coupled with a prolonged electioneering period,” the report states.

For every Ksh4 of corporation tax paid in Kenya, approximately Ksh1 was paid by the banking sector

The decline in taxes arising from declined profitability in 2017 is reflected in the reported year on year decline of the industry’s net income (of – 4.79%) for the period 2016 to 2017. This is also reflected in the decline in growth of net assets in the sector in 2017 of 6.8% down from an 11% growth in the previous year.

The report further shows that, for every Ksh4 of corporation tax paid in Kenya, approximately Ksh1 was paid by the banking sector. This translates to 26% of the corporate taxes collected by the Kenya Revenue Authority (KRA).

Kenya Bankers Association (KBA) CEO Dr Habil Olaka said PwC underscored the findings from KBA’s internal review. He said KBA’s shared value report has understated the industry’s tax contribution, and PwC has facilitated in providing an even clearer picture in terms of how banks lead in the area of tax compliance and contribution to the national budget.

“Banks operate in a highly regulated environment and this has led to very high levels of transparency. When transparency levels are elevated, inevitably the levels of tax compliance will be very high and the relative and absolute quantum of tax paid to the Government is enhanced,” said Dr Olaka.

Next Read >> From High-Flying Radio Presenter to Homeless Tenant 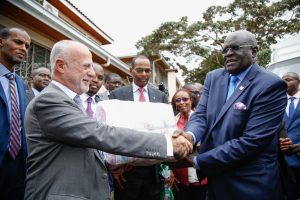 Over 800,000 Girls To Receive Sanitary Towels Ahead of National Exams
Foundation will work with local manufacturers to produce the pads