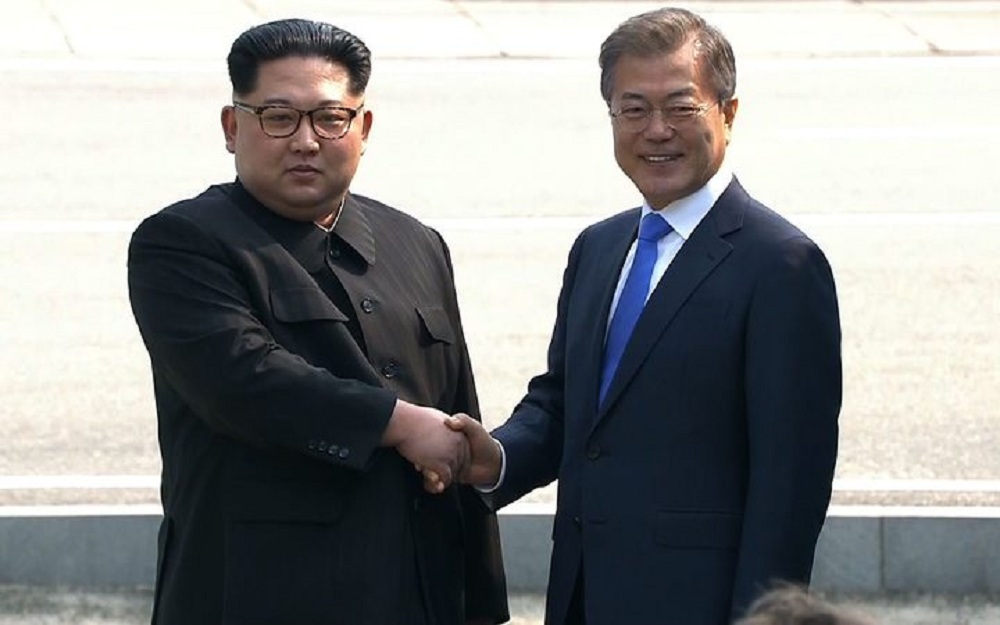 Kim Jong-un has pledged a “new history” in relations with his neighbour as he became the first North Korean leader to set foot in South Korea since the end of the Korean War in 1953.

In a moment rich with symbolism and pomp, South Korean leader Moon Jae-in and Mr Kim shook hands at the border.

Mr Kim said it was the “starting point” for peace, after crossing the military line that divides the peninsula. It comes just months after warlike rhetoric from North Korea.

Much of what the summit will focus on has been agreed in advance, but many analysts remain sceptical about the North’s apparent enthusiasm for engagement.

The leaders were met on Friday by an honour guard in traditional costume on the South Korean side. The pair walked to the Peace House in Panmunjom, a military compound in the demilitarised zone (DMZ) between the two countries.

Mr Kim then invited the South Korean president to step briefly across the demarcation line into North Korea, before the pair stepped back into South Korea – all the while holding hands.

It was an apparently unscripted moment during a highly choreographed sequence of events.

When the first session ended, the pair separated for lunch and Mr Kim returned to the North in a heavily guarded black limousine.

When he returned in the afternoon, the leaders took part in a ceremony consisting of the planting of a pine tree using soil and water from both countries.

The pair shovelled soil on the roots of the tree and unveiled a stone marker featuring their names, official titles and a message that read: “Planting peace and prosperity.”

The summit will conclude with the leaders signing an agreement and delivering a joint statement before dinner. The banquet will be held on the South’s side and the menu is as symbolic as the other rituals.

Mr Kim will be served the Swiss potato dish rösti – a nod to his time studying in Switzerland – along with the North’s signature dish of cold noodles, and a North Korean liquor.

Mr Kim is accompanied by nine officials, including his powerful and influential sister Kim Yo-jong.

The meeting – the first between Korean leaders in more than a decade – is seen as a step toward possible peace on the peninsula and marks the first summit of its kind for Mr Kim.