A Facebook post claiming that a combination of leaves, roots, and bark of Jatropha curcas, cassava, and black seed can cure the Human Immunodeficiency Virus (HIV) is PARTLY FALSE.

The post advises people living with HIV/AIDS to take the treatment for two months to get optimal results. “The extracts of each plant are dried and crushed to create a very effective natural remedy for eliminating HIV in the body,” the post claims. 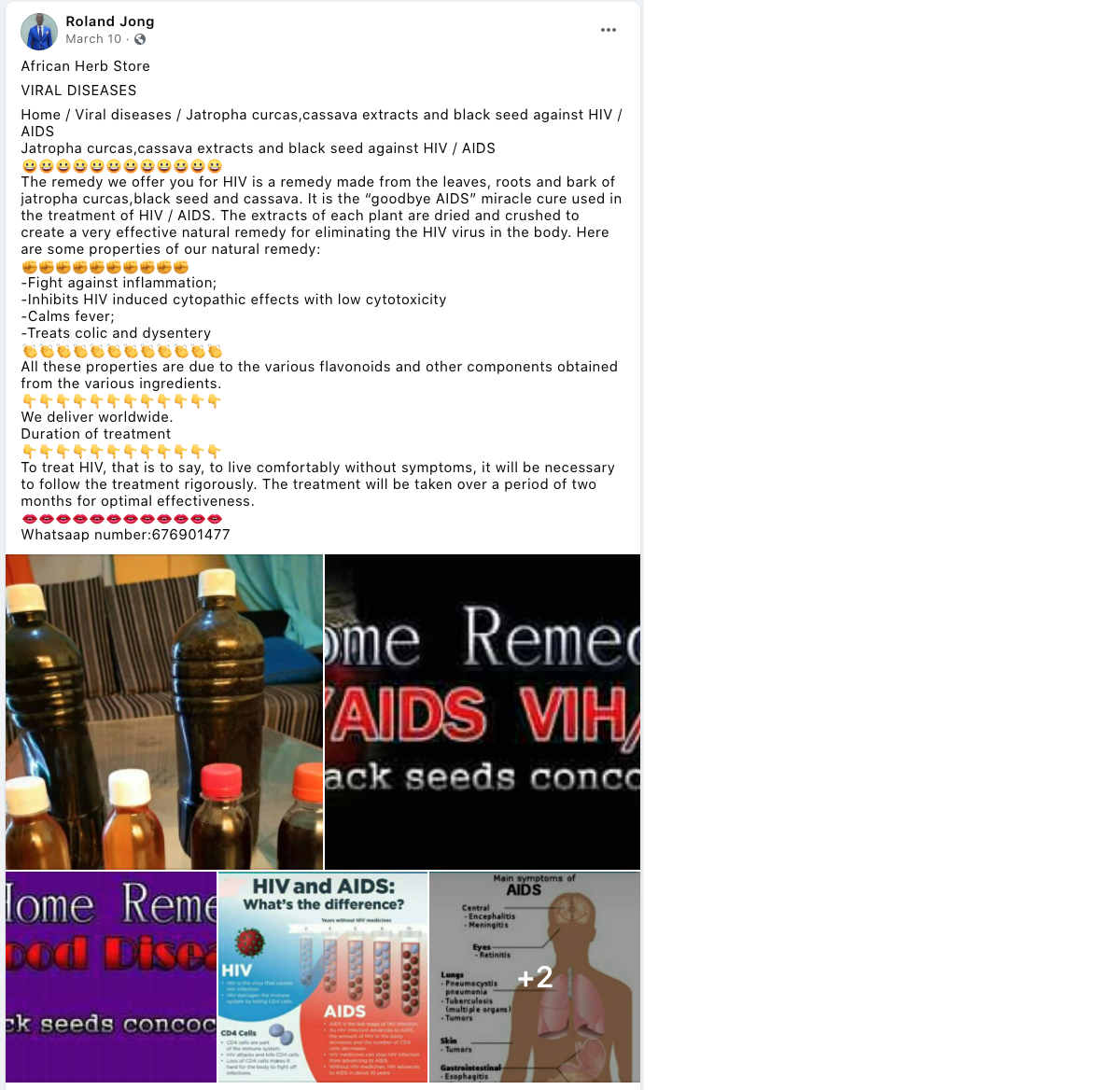 HIV is a virus that attacks the body’s immune system. If not managed using antiretroviral therapy (ART), it leads to AIDS (acquired immunodeficiency syndrome), which further weakens one’s immune system, making them vulnerable to many infections and diseases. A WhatsApp number is then provided for those interested in purchasing the herbal treatment.

To verify the veracity of the claim, PesaCheck looked at several research papers done on the subject and found no scientific evidence that Jatropha Curcas Linn and Cassava can cure HIV. Only black seed has shown promising potential, in limited studies, in treating HIV.

Jatropha Curcas Linn is a drought-resistant perennial plant that is found in the wild and semi-cultivated areas such as Central and South America, Africa, India, and Southeast Asia.

All parts of Jatropha such as the seeds, leaves, and bark have been used for traditional medicine and veterinary purposes for many years. Some of the medicinal purposes include antitumor activities, molluscicidal, insecticidal, and fungicidal properties.

PesaCheck also investigated whether the leaves of Jatropha gossypiifolia can cure HIV/AIDS and found no proof that it can.

There is also no scientific evidence that the leaves, roots, and bark of cassava can cure HIV. However, there is some evidence through this study that vitamin A bio-fortified cassava (especially when pruned before harvest) can reduce the occurrence and complications of type 2 diabetes mellitus.

This is because cassava has a prebiotic fibre that promotes the growth of probiotic bacteria that ferment in the intestines. That increases metabolism and the speed at which blood sugar is eliminated from the blood. Cassava also has a lower glycemic index (46) compared to other starchy foods which slow down its digestion and reduces the chance of spiked blood sugar after eating.

A 2015 study shows that an alcohol-based cassava leaf extract can treat diarrhoea.

The final part of the claim, which states that black seed can cure HIV, could be true. A case in point is a study that alleges to have cured a HIV-positive person using a black seed (Nigella sativa) concoction.

The patient was put on 10 ml of the black seed concoction twice a day for six months. After 187 days, the patient was seronegative (giving a negative result in a test of blood serum, e.g. for the presence of a virus).

After 24 months of staying away from the herbal therapy, tests still showed that the patient was seronegative, viraemic, and had a normal CD4 count. However, that was one isolated case and more studies need to be done on a large group of people to conclude that black seed can cure HIV.

It is possible that black seed, just like the antiretroviral therapy (ART), suppressed the virus into a HIV reservoir, making the virus undetectable in a HIV antibody test. This can make one believe that they are cured but in reality, the HIV antibodies are too low for some tests to detect, and hence the result shows negative.

An example is a baby who was born HIV positive in Mississippi in 2010. The baby began ART soon after birth and went in remission for two years. However, after that, the virus came back.

Nonetheless, few people have allegedly been cured of HIV. One is the Berlin patient who was effectively cured in 2008. He underwent a stem cell transplant for leukaemia and was mistakenly cured of HIV.

It was later discovered that the stem cell donor was carrying a mutation of an HIV-related gene called CCR5. This mutation makes one resistant to HIV infection. In 2019, two other people got completely cured of HIV using the same stem cell therapy.

Other successes were registered in the Visconti Cohort trial where 20 people in France started ART after weeks of infection. They stopped taking the drugs yet their HIV levels are low several years on. 15 children from Thailand also underwent the same trial and the same results were experienced.

Though those cases are notable breakthroughs, the studies were controlled and they were performed on small groups of people.

The World Health Organization (WHO) maintains that there is no cure for HIV, and urges all people living with the viral disease to take ARV drugs regardless of clinical status, or CD4 cell count. ART, WHO says, does not cure HIV, but suppresses viral replication and makes one’s immune system strong enough to fight off opportunistic infections.

PesaCheck has looked into a Facebook post claiming that the leaves, roots, and bark of Jatropha curcas, cassava, and black seed can cure the Human Immunodeficiency Virus (HIV) and finds it to be PARTLY FALSE.

[ This fact-check was written by PesaCheck fact-checker Naomi Wanjiku ]

10 Simple But Very Effective Actions That Build a Blissful Marriage

FAKE: Letter to William Ruto About Tax Dues Is a Hoax