Radio presenter Kamene Goro has declared nothing will stop her from making a successful debut at Kiss 100 even after her former employer, NRG, successfully obtained a court order restraining her and co-presenter Andrew Kibe from going on air for allegedly violating their contractual terms.

NRG is aggrieved that Kamene and Kibe resigned without adhering to the one-month notice requirement and instead paid their ex-employer three months salary in lieu of notice.

The media house avers the period of three months is reasonable to restrain them considering the substantial investment made on the duo and to safeguard its business considering they are willing to pay NRG during the non-competition period.

Lady Justice Hellen Wasilwa last Friday granted NRG its prayers restraining the duo from performing services for, carrying or being engaged or interested or concerned directly or indirectly or publicly identifying with the promotion of or the services provided by, any other radio station within the Republic of Kenya or in any business which in anyway competes with the Applicant’s business pending the hearing and determination of this application.

At the weekend, Kamene took to her Instagram page to lament about what she saw as betrayal from her former employer.

“I’ve been taken to court. It’s now public knowledge. An injunction has been slapped on me. I’m not supposed to go on air, so what guys? How am I supposed to work? Where do I earn my living from? my career, my future… Hard work and humanity are two things I always pray for. I always pray that God maintains them in me because that’s the best of me. My humanity, my heart and my hard work ethic,” she said.

However, she appears to have moved on and is busy strategising on her show even though she will have to wait a little longer to go on air.

No days off! #Phoenix

While many of her followers have been supportive, there are those who equally feel she should have handled the situation better.

“You cannot act victim for something you brought (sic) yourself. The law must be respected. Contracts must be respected. If you were fired from your former job, you would cry foul of wrongful dismissal. Now when the company sues you for not respecting the contract you signed without being coerced, you are here playing victim. How do you wake up one day and tell your boss you are leaving in 3 days? What happened to a notice?” posed on Papa Ace.

“The role of a notice is to enable a company look for your replacement since they are also in business. But if you really have to go, don’t be arrogant about it. Don’t bulldoze. Just negotiate and possibly even buy the remaining bit of the contract. Otherwise don’t play victim and you and Kibe are wrong!! That said all the best,” he added.

However, Radio Africa´s CEO,Patrick Quarcoo told The Star: “We shall aggressively defend our employees on this suit.” 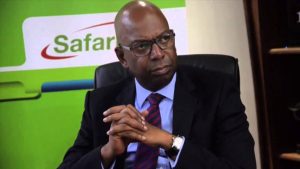