The fate of Bus Rapid Transit plan hangs in the balance after Transport CS James Macharia said the Ksh7million project would not be rolled out any time soon. [ Photo / Nairobiwire ]

Nairobi motorists have received a gift from Governor Mike Sonko, which is making the Christmas mood as foul as the wet weather.

In a notice issued by the county’s Director of Parking Tom Tinega, parking charges in the city centre has shot up by 100% from the current Ksh200 to Ksh400.

The county says it is maximizing revenue collection, but it comes also as a veiled attempt to decongest the city centre.

The development is an about-turn from Sonko’s January 2019 directive cutting parking fees from Ksh300 set by his predecessor, Dr Evans Kidero, to Ksh200. Kidero in 2013 raised parking from Ksh140.

Ironically, City Hall had proposed an increase to Ksh400 in the 2018 Finance Bill but after reported consultations with partners in the transport sector and other stakeholders, it was agreed that the fees be reduced, much to the relief of motorists.

The expected influx of cars was to be countered by the planned Bus Rapid Transit (BRT) system. But the increase in parking fees is a covert admission that plans for the BRT system have stalled.

The fate of the BRT plan hangs in the balance after Transport CS James Macharia said the Ksh7million project, co-funded by the World Bank, would not be rolled out any time soon.

In an interesting development, the City Council has categorized parking charges based on regions, with the city centre, grouped as Zone One, being the most expensive place to park your car.

Zone Three includes all commercial centres not mentioned in Zone One and Two and will cost only Ksh100.

Tinega said motorists will be required to top up the charges when moving to a zone with a higher charge.

The high fees will hurt Nairobians wallet even as the economic slowdown rages budgets. A motorist who parks in town daily for six days a week will spend at least Ksh9,600 per month, or Ksh115,000 on parking charges alone.

Sonko assented to the Nairobi City County Finance Bill, 2019 on September 25 after it was passed by the County Assembly.

Parking is an easy kill for City Hall and it is turning out to be like the sin tax imposed on alcohol and cigarettes by the national government whenever it runs out of options in increasing tax collections.

While commending City Hall for coming up with measures to raise revenue, county assembly Finance, Budget and Appropriation Committee chairman Robert Mbatia said parking fees adjustments should have been modest to minimise corruption.

He added: “As much as we are attempting to decongest the CBD by discouraging motorists to come with their vehicles, what have we done to give them alternative methods of transport?”

Read >> Meet The Nairobi King and Queen of Video Gaming 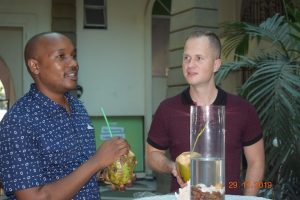