Daily Nation journalist Paul letiwa has reported receiving threatening messages from unknown persons even before he settles in Samburu County where he was dispatched by his employer two weeks ago. 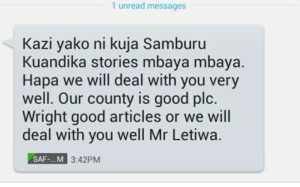 Mr Letiwa, who had worked for the company in Nairobi as a correspondent for five years, says he started receiving threats through his phone after he published a story on misuse of public funds by the Samburu County government. Some county officials dismissed the story, saying it “it lacks facts”.

One of the messages from an anonymous person warned the writer against publishing negative stories about the county.  The number the sender used to threaten him is not registered and was switched off immediately.

This is not the first time Mr Letiwa has received threats. In 2012, when he wrote a s********s story on Oasi Church of God in Nairobi that was asking its followers to send money through Safaricom till number to receive prayers and get employed, he got threats as well.

The writer, who was awarded by Nation Media Group in 2010 for his exceptional work in property, business writings and Swahili translation, was  moved to Samburu to improve coverage in the vast semi-arid region.

However, Mr Letiwa is not the first journalist to be threatened in Samburu. His predecessor, Johnston Keti, was constantly intimidated through messages and phone calls every time he wrote a story that the Samburu County officials were not comfortable with. Keti quit recently in unclear circumstances.