A tweet shared by Senior Counsel Ahmednasir Abdullahi showing Murang’a Woman Rep Sabina Chege at the Sagana III meeting is fake. On 23rd February 2022, the day the Sagana III meeting was being held, lawyer Ahmednassir Abdullahi shared a photo of Sabina Chege seen in the company of three other people and caption saying: “On behalf of Hon Sabina Chege KENYANS must thank the doctors at Nairobi Hospital for the miracle treatment they performed to allow her attend #Sagana 3.”

Ms Chege had reportedly been admitted to hospital before the Sagana III meeting held on 23rd February at which President Uhuru Kenyatta announced he was supporting ODM leader Raila Odinga for the presidency in the 9th August elections. Ms Chege’s illness was revealed after she skipped an IEBC grilling session over remarks she had made at a rally in Western Kenya in what was seen by a section of the political divide as a ruse to avoid grilling. 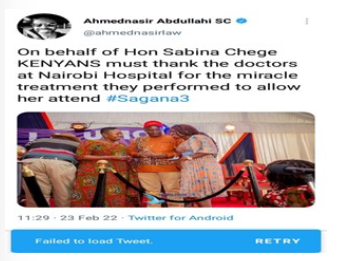 The electoral commission’s Code of Conduct Enforcement Committee had summoned Ms Chege to explain utterances made during the rally in Isibuye, Vihiga County, on 10th February 2022, in which she claimed that vote-rigging is possible in elections. “I have heard others saying we rigged, there is some truth in it. So if we managed to rig, even this one we can. They think they are the smartest,” she said at the rally.

Rarieda Member of Parliament Otiende Amolo on 22nd February told the Independent Electoral and Boundaries Commission (IEBC) that Ms Chege, his client, was unwell and admitted to Nairobi Hospital. According to him, Ms Chege was admitted on 16th February.

A fact-check on the tweet reveals that the caption is misleading.  Our investigations found that the photo used by Abdullahi in his tweet had been uploaded on Sabina’s Facebook page a month earlier, on 22nd January, when Senator James Orengo and Siaya leaders welcomed a delegation from Mount Kenya led by Kikuyu Council of Elders.

On 25th February, she shared a photo of herself in hospital when a number of leaders including Siaya Senator James Orengo and her lawyer, Otiende Amolo, visited her in hospital. “Friends like you make life’s challenging moments more bearable. Thanks for being my friends, colleagues, brothers and sisters in Christ,” she said in the caption.

After being pointed out as misleading, Mr Abdullahi pulled down his tweet even though those who had retweeted still maintain it, though without the photo.