Mobile money transactions have driven the move to cashless economy, but taxation could reverse that, a think tank report says. [Photo: REUTERS/Thomas Mukoya/Illustration}

Kenya is a world leader in enhancing a cashless economy but taxation threatens to arrest that upward curve, a report by intellectual think tank Brookings shows.

“The taxation policy on these micro-transactions has the potential to reverse some of the financial inclusion and overall financial gains as well as incentivize people to return to cash,” the policy brief says.

It adds, “The tax policy and design of taxes on retail electronic transactions as well as bank transactions has the potential to reverse the gains that technology has pushed Kenya to the frontier of electronic payments and financial inclusion and back to cash preference and financial exclusion for low-income earners.”

Taxing mobile money transactions was first introduced in 2013 via an excise tax rate of 10%. This was later revised by the Finance Act of 2018, which increased tax on money transfer services through mobile phones to 12% and similar transactions through banks to 12%.

Ndung’u says that taxation on airtime and mobile phone financial transactions constitutes “double taxation” since airtime is required for mobile money transactions. This leads to what is called a Laffer Curve, where rates of taxation result in the reverse in levels of government revenue that the State is aiming at.

“In the short term, the demand elasticity may not change and so may generate the desired tax revenue. However, further tax increases may push taxpayers to look for alternatives in order to escape the tax, causing the government to net less and less revenue,” the policy brief says.

The tax on beer, which the policy brief cites as being there for the last fifteen years, results in changing consumption behaviour. “… the rich would upgrade consumption to other alcoholic beverages that are taxed differently. The poor would downgrade consumption and create a market for illicit alcoholic beverages … with devastating consequences on the youth and rural population who consume these illicit, unregulated drinks.”

The Brookings report cites other examples from previous studies in Kenya where an increase in tax has resulted in less revenue collected by the government, especially due to the distortion in the market.

“The living example is excise tax on beer: The study by Karingi, Kimenyi, and Ndung’u (2001) on optimal taxation of excisable products in Kenya showed that the excise tax follows a Laffer curve. In other words, it becomes a distortion once the optimal rate is surpassed.”

In turn, the Ndung’u authored report says, “Kenya was moving into a cashless economy. This trend is now in danger of reversal.

As such, the report calls for any future review of excise tax rates on airtime and financial services to be preceded with a thorough analysis of taxing as against the likely change in consumption behavior for the financial services.

The report says that Kenya has been at the forefront of driving financial inclusion, driven largely by the mobile phones’ entry into the financial services ecosystem. “A retail electronic payments platform, the main entry point for the unbanked, has now expanded to become a transactions platform using mobile phones and e-money, and further into a virtual banking system.” 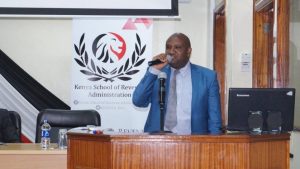