The profit margins of Kenya’s media industry shrank by Ksh1.5 billion in the last one year as ad revenues diminished, according to new figures.

A shift in government advertising policy to centralise media buying last year has narrowed the key revenue stream to a trickle for most media houses while vicious digital platforms have raided the traditional media’s lunch table, biting off a huge chunk of the advertising pie.

While it has been common knowledge that media houses have been doing badly financially, the extent of the dent in their bottom lines emerged last week when one of the media industry captains, Radio Africa CEO Patrick Quarcoo, revealed that media houses had lost Ksh1.5 billion in the year to June 2016. As a result, 550 senior industry personnel had been sacked, a huge number seen agaainst the small number of media houses in Kenya.

“Some major players are in a loss position today, over 550 senior industry professionals declared redundant in a period characterised by dropping print circulation, radio and TV station closures and massive flux,” he said.

It’s been either loses or drop in profitability across the industry. The biggest media houses have been hardest hit. Nation Media Group’s (NMG) full-year earnings for 2015 dropped by Ksh300 million to Sh2.2 billion, from Sh2.5 billion a year earlier.

Standard Group, Kenya’s second biggest media house, recorded nearly Ksh400 million loss for the period, after issuing a profit warning in the second half of the year when profits dipped by 90% to a mere Ksh21 million. Investors and media watchers are anxiously waiting for the listed media houses’ first half profits for this year, which are expected to drop dramatically for NMG.

The trend is no different in the other media houses – Royal Media Services and Radio Africa – which are privately held and do not publish their financials. The two have invested heavily in broadcasting, and are undergoing restructuring at different levels, which has already pushed out some employees. KBC is owned by the government and thus not fully commercial and does not make its financial performance public.

Mr Quarcoo says Radio Africa Group is shifting to a new digital-based business model as the dynamics shift for media industry.  While Quarcoo, whose memo coincided with Radio Africa’s 16th year of operation, said the next year promises to be good one for the media with a General Election slated for August next year, he warned that the traditional media is likely to take further hits as focus shifts to digital media.

“The future for us and our media colleagues,” he said, “is unabashedly digital with big cost-cuts looming and corporate structural changes coming for all media businesses.”

Nation recently surprised the industry by closing down three radio stations and merging its TVs in a major restructuring geared at cutting costs and channeling move focus to digital media. For now, focus in on NMG and Standard Group’s half year results.

RECOVERY: Why it won’t be easy to revive KBC

OPINION: Government is killing the media. That’s not a nice idea 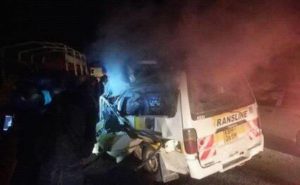