Despite the Kenyatta Family’s vast wealth,  taxpayers pay Former First Lady Mama Ngina more than half a million every month.

On Friday, The Business Daily, quoting official government documents reported that the country’s First Lady has been raking in Ksh568,216 by virtue of being the country’s founding father’s first wife since 1978.

Debate on whether the spouses of former presidents deserve to be paid by the public is still a hot potato with governance experts and lawyers unable to agree whether or not they should draw their salaries from public coffers.

However, according to the report, Treasury officials say that the payments are tied to the law that provides for a spouse of a sitting or retired president to be paid 40% of the salary paid to the sitting head of state should their supposes die.

It reveals that Mama Ngina started drawing the salary way before 2013 when her son, President Uhuru Kenyatta assumed office in 2013.

The Presidential Retirement Benefits Act stipulates, “The spouse benefits upon the death of a serving president or a retired head of state is in receipt or entitled to a pension under this Act, his surviving spouse shall be entitled to benefits amounting to fifty percent of such pension,”

Former presidents Daniel Moi and Mwai Kibaki’s pension stand at Ksh1.18 million, equivalent to 80% of President Uhuru Kenyatta’s salary before factoring other allowances such as fuel, house and entertainment allowances.

Read: 7 Remarks Uhuru has Made That Show He is Out Of Touch With Kenyans

All these former government operatives earn more than half a million and a flurry of other perks “befitting” their status including fuel, medical allowances and aide costs all footed by the taxpayer.

What’s more, the report reveals that Treasury has set aside Ksh1.5 billion in the current financial year ending June to cater for such costs.

The report generated instant backlash online especially when Kenyans factored in that the Kenyattas are embarrassingly wealthy and a salary for the first family’s matriarch paid by taxpayers is adding more pain on the already overburdened taxpayer.

Kenyatta’s control 13.2% of Kenya’s third-largest bank by assets NCBA. Their stake is valued at Ksh6.3 billion.

The family owns Brookside Dairies which controls 40% of the milk market share in the country and has already spread its wings to East Africa. The family’s ownership of land is unparalleled with their land estimated to run to 115,000 hectares of land.

The family also has interests in insurance, real estate, hospitality, and media. 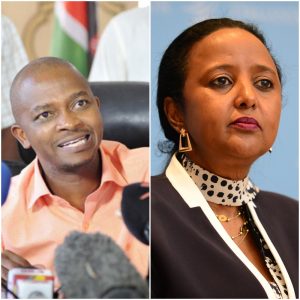 Government or FKF: Who is to Blame for Kenyan Football’s Money Woes?
Kenya's national football team Harambee Stars have had financial woes…