Sony Sugar players celebrating a goal in a past KPL match. The club has been expelled from the league. Photo/ Futaa

Kenya Premier League has expelled top-flight club Sony Sugar from the league after being part of 10 game weeks.

The club is expelled after it failed to show up to three KPL fixtures against AFC Leopards, Tusker FC, and Zoo Kericho. The Nyanza based club has been a permanent participant in the top tier sine gaining entry in 1993.

Sony’s woes have been gathering up alongside the league’s money problems since SportPesa announced cancellation on all local sports sponsorships. The gaming giants withdrew after its relationship with the government soured over tax evasion allegations and new betting regulations.

In a statement, Kenya Premier League organizers said that Sony’s expulsion was under the game’s rules and regulations.

“Match Number 090 between Zoo FC and Sony Sugar FC which was scheduled to be played on Wednesday, November 20, 2019, at the Kericho Green Stadium, kick-off 3:00 pm, it was noted that the away club, Sony Sugar FC, failed to honour the match. That being the third time this season that Sony Sugar FC has failed to honour a match, per the KPL policy on failure or refusal to honour matches, and also per articles 4.1.12 and 4.1.13 of the 2019 FKF Rules and Regulations, Sony Sugar FC have been expelled from the Kenyan Premier League and all its results have been nullified. The remaining league fixtures involving the club have also been cancelled,” wrote KPL in a statement.

Sony’s exit from the league will see a number of teams deducted points. Clubs that have lost points as a result of Sony’s expulsion are KCB, Bandari FC, Ulinzi Stars, AFC Leopards, Tusker FC, Wazito FC, Mathare United and Zoo Kericho as well as Kisumu All-Stars, who had drawn 1-1 with Sony.

The financial crisis in Kenyan Football is heating up with a likelihood of the top tier league to be halted.

The issue affects players, clubs in general and even match officials. Hundreds of players, dozens of coaches and match officials have complained about unpaid salaries and allowances. Literally, there is no money in Kenyan Football currently.

According to Kakamega Homeboyz owner and club chairman Cleophas Shimanyula, the fate of football in Kenya is scary as there is no money everywhere.

“We are using referees who have not been paid for months and you know what that means. They have nothing to lose. Most players have also not been paid and do not even train. It is scary,” said Shimanyula as quoted by Nation.

Individual clubs are also suffering as well. Community clubs like AFC Leopards and Gor Mahia have turned to their fans to help them raise funds needed to run the club.

Sony Sugar is the only club that has since been expelled from the league this season but it could not be the only one. 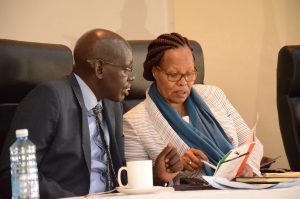 The Big KNEC Robbery: Anxious Parents Lose Millions in Exam Results Rip-off
A total of 1,083,456 pupils sat the exam and at…