The New Kenya Planters Co-operative Union (KPCU) has not been registered as a private limited company as alleged by Twitter user Propesa, who uses the handle @propesaa.

In a tweet shared on Tuesday, November 22, 2022, Propesa alleged that KPCU had been privatised by the previous regime led by President Uhuru Kenyatta.

“Kenyans today are waking up to learn that KPCU was turned into a Private Company. Uhuru men started sharing amongst themselves government properties,” Propesa wrote on Twitter.

In a quick rejoinder, Business Registration Service (BRS), the state corporation mandated to oversee operations of the companies registry, official receiver in insolvency, e-collateral and hire purchase registries in Kenya, clarified that the allegatįons were false.

According to BRS, a Public Limited Company is a public company that has share capital and limits the liability of each member to the amount unpaid on their shares. It may offer its shares for sale to the general public and may be listed at the securities.

On the other hand, a private limited company is a company that has share capital and the liability of each member is limited to the amount, if any, unpaid on their shares. A private company cannot offer its shares for sale to the general public and may not have more than 50 members.

KPCU, according to the document shared by Propesa, has 10 billion ordinary shares valued at Ksh2 each, putting its nominal share capital at Ksh20 billion. 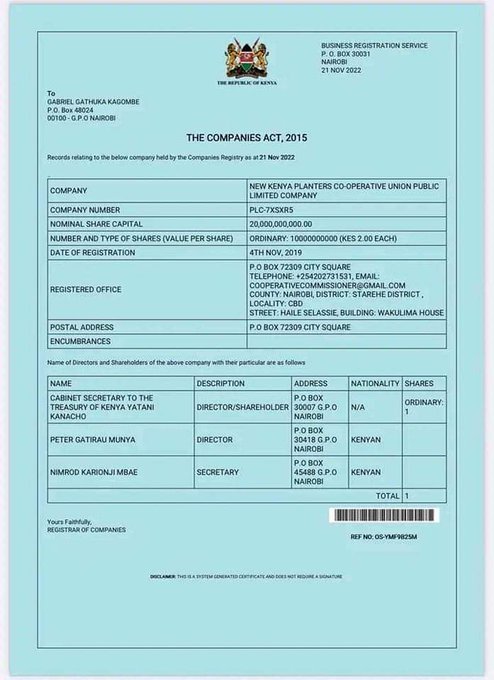 >>> False: This Image Does Not Show Former President Uhuru Kenyatta Enjoying Life In The Village

False: This Photo Does Not Show Mt Kenya Residents Queuing For Relief Food

False: This Image Does Not Show Former President Uhuru Kenyatta Enjoying Life In The Village

FAKE: Government Has Not Introduced Pocketless Uniforms For Police Officers