Kenya’s earnings from fresh produce exports in 2018 jumped to Ksh 153.68 billion, a 33%  increase over 2017 earnings, according to the statistics released by the Kenya Flower Council (KFC), Fresh Produce Exporters Association of Kenya (FPEAK), and Fresh Produce Consortium of Kenya (FPCK).

Hosea Machuki, Chief Executive Officer of Fresh Produce Exporters Association of Kenya, who unveiled the statistics, said the sector has remained resilient amid various challenges, both fiscal and operational.

“The sector has seen marked resilience and continued growth and huge potential which has enabled it weather various challenges such as the Brexit shock and fertilizer shortages which the sector faced,” said Mr Machuki said.

The cut-flower export still remains the largest earner, contributing 74% of the total fresh produce annual earnings, fruits at 8% and vegetables at 18%.

In 2018, the horticulture industry was hit hard by acute shortage of soluble fertilizer resulting from stringent and lengthy clearance process by the Kenya Bureau of Standard at the port of entry. The sector was also hit by the imposition of 16% VAT on pest control products and VAT return estimated to be Ksh 3.5 billion, increasing the cost of production, resulting in non-competitiveness in the international markets.

“These challenges has compounded the many challenges Kenyan farmers face including numerous taxes, and levies at national and county governments, high energy costs, trade and phytosanitary restrictions in several potential markets, and the recent notice on closure of run-way during the valentine peak season,” said Clement Tulezi, chief Executive Office, Kenya Flower Council.

Trade Principal Secretary Dr Chris Kiptoo said the Government was working toward expanding the export market for the horticultural products besides the primary European markets, citing China and the United States.

Dr Kiptoo also noted that the Government was in discussion with the United Kingdom on the issue of Brexit to ensure that the sector is not adversely affected, irrespective of the outcome of the process. 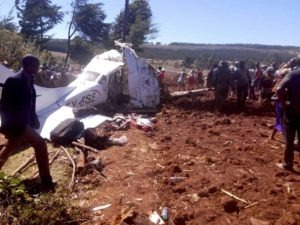