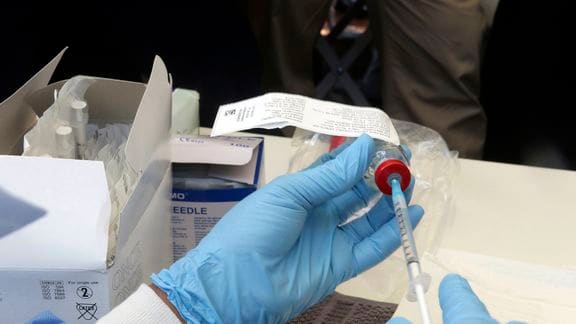 Kenya is on high alert after a woman from Malaba was admitted at Kericho County Referral Hospital and put on isolation depicting Ebola like symptoms.

The female patient was admitted to Siloam Hospital in Kericho on Sunday Night, the case is likely to force the government to scale up its alertness following an outbreak in neighbouring country, Uganda.

Consequently, Dr David Ekuwam, the county’s health officer in an interview with journalists said that the patient’s blood samples have been sent to the Kenya Medical Research Institute (KEMRI) for specialised tests.

“It’s important to note that that the symptoms that have been exhibited by the patient can be indicative of any other medical condition and there is no confirmed case of Ebola at this moment,” said Dr Ekuwam.

Kericho County Government has already confirmed that the results will be out in 12-24 hours.

“The County Disease Surveillance Team immediately took over the matter and took all the necessary precautions to ensure that there was minimal contact between the patient and other persons at the hospital including the staff and the other hospital users.” reads a statement signed by the county’s communications boss Timothy Kemei.

Sources at the medical facility  indicated that the patient who hails from Malaba was travelling to Kericho to visit her husband.

Kericho County Hospital administrator Margaret Okiro said that when the patient was brought in she complained of headache, body fever, puffy face, some diarrhoea, and nausea.

The health administrator added that the patient was transferred acting on Ministry of Health protocol that requires all medical facilities in Kenya to report any medical cases with symptoms of fever.

“This patient needed close and further elaborate investigations while under appropriate isolation requirements till diagnosed for targeted treatment to be given,” she said.

The case will be of keen interest to the Ministry of Health after Uganda reported it’s first Ebola case on June 11. Democratic Republic of Congo (DRC) also declared its tenth outbreak of Ebola in 40 years on August 1, 2018.

Ebola is a disease whose symptoms include sudden fever, body weakness,muscle pain, headache and sore throat.

After the symptoms manifest themselves, the victim is then plunged to a state of vomiting, bodywide rash, impaired kidney as well as internal and external bleeding.

The fever has an incubation period of two to 21 days implying that someone can be infected with the virus and not yet know that he or she is sick for up to 21 days when the symptoms begin to show.