A Kenya Airways plane. Following codesharing deal, KQ will expand its offer to Italy and Europe by placing its ‘KQ’ flight code on Alitalia’s services from Rome to 16 Italian domestic destinations. Credit: File.

While Kenya has done well to secure direct flights to the United States, a lot more needs to be done if the Jomo Kenyatta International Airport (JKIA) is to fend off the cutthroat competition from regional airports and become East Africa’s preferred transit hub.

Kenya Airways (KQ) is facing stiff competition from major players in the region including Ethiopian Airlines, Qatar Airways and Emirates at a time when Kenya is also working to secure direct flights to other global cities.

Jonny Andersen, Kenya Airports Authority (KAA) CEO in an interview on NTV on November 9 said that while Kenya has made significant strides to become a major player in the African market, full potential is yet to be realised.

“Yes but also no. We need to upgrade so that we are able to deliver for the future, otherwise we will probably lose market share,” said Mr Andersen in response to the question of possible consequences if Kenya does not improve its aviation infrastructure competitively.

Mr Andersen projected a period of 3-4 years as a realistic timeline to meet its targets, by then he says, the country will have put in place the requisite infrastructure to outperform the regional competitors.

“I will say at the very least 36 months for us to upgrade our terminals and runways, fast exit ways and to employ the use of technology in our various operations. When we achieve that we will slowly but steadily start surging ahead of our competitors because we are Kenyans and we can do this,” said Mr. Andersen.

The experienced airline manager also warned that it will take at least half an year before the global market identifies JKIA as a “top” transit point in Africa. So far, the direct flights to New York to and fro have recorded low number of bookings. He however allayed fears saying that is normal for a new route.

“The route to New York has just started. It will take time before it catches up. My best guest would be half an year,” said Mr. Andersen.

Hard pressed to explain on whether corruption has crippled service delivery at the authority, the former Director of National Airports in Norway admitted that the vice has presented him with a number of challenges since he took over in 2016 but progress has been made to slay the graft dragon.

The achievements include ending of the parking menace at the airport and instilling a corruption free mindset at the authority.

Those who engage in corruption lose their job immediately, he said. 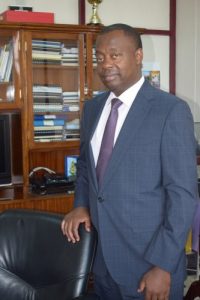