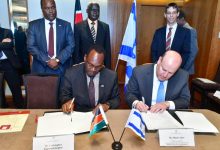 .The government of Israel has pledged to help Kenya implement World Bank projects, among them cyber security and water technologies.

During the meeting, the Kenyan delegation was led by the Principal Secretary for Trade Dr. Chris Kiptoo, accompanied by Mr. Jon Chessonithe Chargé d’affaires of Kenya Embassy in Tel Aviv. The host side was led by Mr Ohad Cohen, Trade Commissioner, Ministry of Economy and Industry of the State of Israel.

Mr Cohen noted that in the past, Israel’s major trading partners included the European Union, the USA and Asian Countries. “It is time Israel focused on Africa, with Kenya being the first priority,” he said.

Mr  Cohen explained that Israel enjoyed a very stable macro-economic environment and commended the desire by both sides to strengthen and diversify their economic and commercial relations in different sectors of their economies on a mutually beneficial basis.

On his part, Dr Kiptoo said Kenya welcomed Israel’s intention to establish an Economic and Trade Mission in Nairobi before the end of this year. He said this will contribute towards enhancing economic and trade relations between the two countries.

He was upbeat that the inauguration of the JTC would lead to improved trade and investment relations between the two countries and, welcomed the investors from Israel to take advantage of the favourable business environment existing in Kenya.