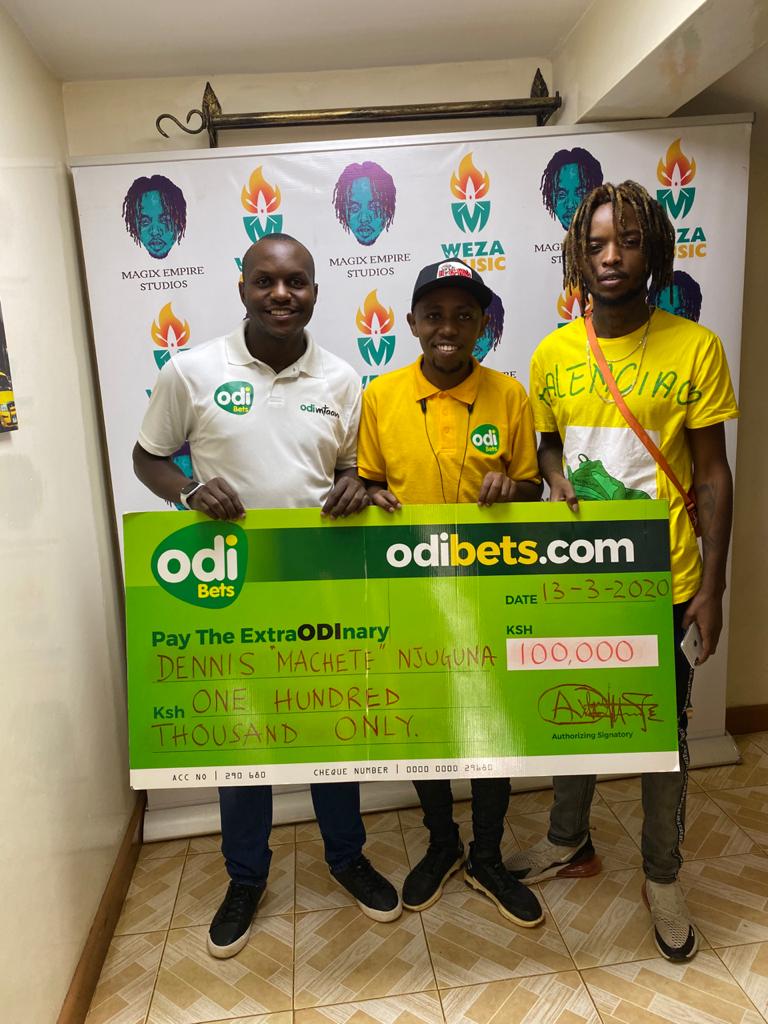 Odibets has not only established itself as one of the leading betting companies in Kenya but also one that has the interests of the youth at heart, especially at the grassroots level. This is evidenced in offering better betting odds or sponsoring local tournaments and kitting more than 35,000 youths in Kenya.

Besides, Odibets has now ventured into tapping youngsters with musical talents.  A beneficiary of this is Dennis Gakunga Njuguna, dancehall artiste from Kawangware, Nairobi, who goes by the stage name Machete Boloman.

Machete, who formerly played football, says he wrote the song to appreciate the good work Odibets has been doing in supporting young talent. He then asked one of their brand ambassadors in Kawangware to have the Odibets management listen to the song he had recorded via phone.

A month later, he received a call from Odibets offices. The management had a pleasant surprise: they offered to pay for five of his projects, both audio and visual.

In the deal, his song Odibets would be the first project to be worked on. He has worked with producer MagixEnga in producing the first song.

“There are two Odibets brand ambassadors from the hood who are my good friends,” Machete says, “so I wrote the song, recorded on phone and I asked them to give to the Odibet management and after a month, I was told they needed me at their office. That’s when I was given the deal, and I went to record at MagixEnga’s studio.”

He said Odibets has paid for five of his projects, Odibet being the first. “They asked me to look for a good producer and I went to MagixEnga. I have four other projects which are fully paid for and I’m grateful to Odibets, they are doing a lot for me as a youth. The deal includes audio and video,” said Machete.

Asked about what his community thinks about the song, the dancehall artiste said that the reception has been good and people have been praising him for singing about Odibets, the company that is making a great impact in the community.

KECOBO noted that MCSK had failed to comply with multiple regulations introduced as part of a reform process for royalty collection and payments in Kenya.

Mejja disclosed that he had the design for his ideal tumbler and had initiated talks with manufacturers in China.

The AM Holiday pop-up channel will give viewers a front-row seat from the comfort of their homes to the biggest Nigerian music and worship festivals.

Multichoice has revamped its brands and given them a fresh new look to reflect a home-grown brand that tells authentic local stories.